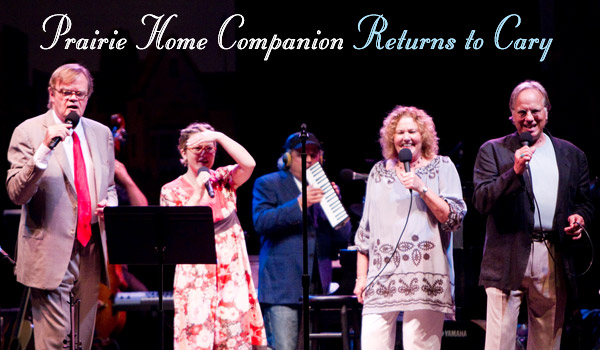 Story by Hal Goodtree. Photo by Joshua Steadman for CaryCitizen.

Cary, NC – We heard this news a few days ago but forgot to post it. Garrison Keillor and A Prairie Home Companion will be returning to Booth Amphtheatre in Cary this summer. Who knows – maybe they’ll tape the show for a national radio broadcast.

Saturday, June 2, 2012 is the date. Tickets are not on sale yet, but check BoothAmphitheatre.com.

The last time Keillor and Co. were in Cary, it was a rainy night in September 2010. Here’s some of what we wrote at the time:

One of the most popular parts of the show is a bit of crazy sketch comedy between Keillor and Fred Newman, the sound effects guy.

Keillor plays the straight man, rambling on about some topic or another while Newman punctuates the narrative with seemingly spontaneous explosions of sound. One moment he’s a helicopter and the next a baby being born.

Keillor’s radio show is strictly G-rated, but his live act is (slightly) more blue. He and Newman had the crowd at Booth Amphitheatre in stitches with Newman’s impersonation of…

Well you’ll have to read the rest to find out what Fred Newman was impersonating: Garrison Keillor Likes Ashworths (September 15, 2010).

See you at the show!