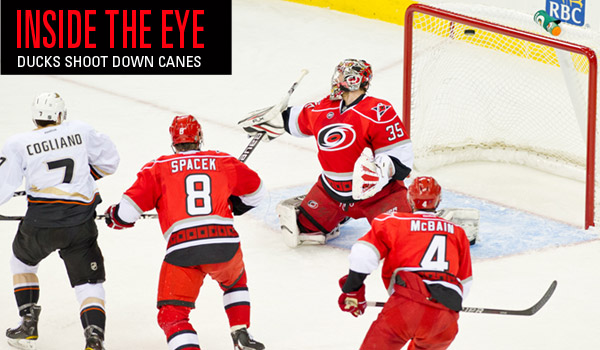 Cary-lina, NC – The Carolina Hurricanes lost another shootout, this time to the Anaheim Ducks, 3-2 after a game well played game by both teams. I’ve never been a fan of shootouts and neither can the Canes as they are the only team not to win a shootout this season dropping all five that they’ve been in.

Both the Canes and the Ducks have had very disappointing seasons. Anaheim has last years’ MVP Cory Perry and a host of other very talented players.  The Ducks are making a late season surge but, just as for the Canes, time may not be on their side. Good luck to them, they’re in the West, meaning their points won’t affect the Canes, and there’s not a dirty player on their team.

With a little over 5 minutes gone in the game, the Canes went on the power play when Bobby Ryan boarded Andreas Nodl at the end of a nice 3 on 2.  Ryan did what he had to do to stop a goal and even said something to Nodl on the way to the box that got smiles from both players.   The power play was one to forget so maybe Ryan knew something. 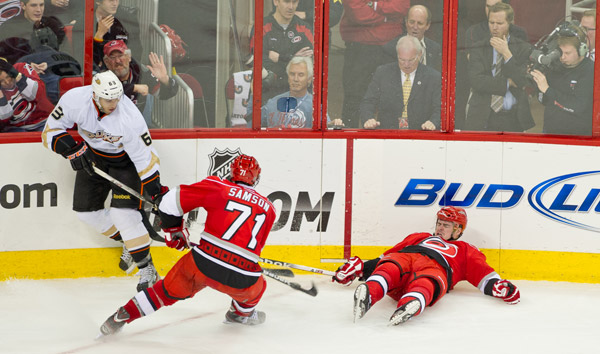 The Ducks were on the last game of a long road trip. Their last home game was a 3-2 OT win against the Canes on Feb 8th.   Midway in the period, Eric Staal was at his own blue line and put a 9 iron shot over the glass taking one of the best penalty killers off the ice.

The Ducks power play looked very good but the Canes penalty kill team did a better job.  Staal’s line was on the ice moving the puck into the Ducks zone when Staal returned.  Jaroslav Spacek was midway in his defensive end, had time as the Ducks were on a line change, passed up to Jiri Tlusty who centered to Staal.  Staal passed to Jerome Samson on the right wing for a quick shot that was stopped by Jonas Hiller.  The rebound, and Samson went to Hiller’s left, Samson collected the puck and sent a backhanded pass/shot that found its way into the net.

Less than a minute later the Ducks evened the score on a wrister by Luca Sbisa (Swiss names have unusual spelling)  from high in the slot after a nice pass from Nick Bonino in the corner. 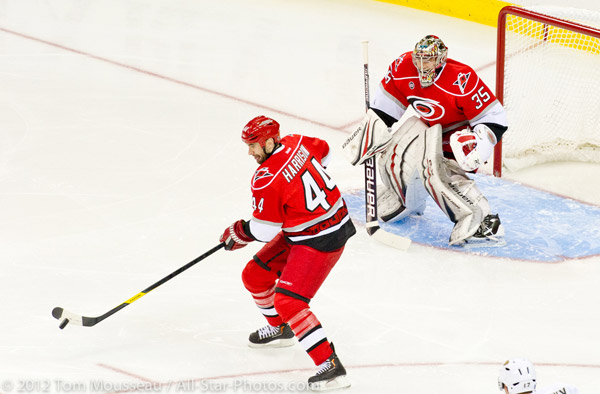 The Canes had their second power play when Ryan tripped Jerome Samson on a cut to the net.  This time Ryan wasn’t so happy with the call (it was a good call) as he dropped the F-bomb just as he sat down in the box.  The first power play unit did a good job this time keeping the puck on the perimeter but didn’t have a great shot on net.

Out comes the second unit.  Jussi Jokinen wins the draw, Anthony Stewart passes to Spacek on the point.  Spacek passed over to Jamie McBain who took 2 strides then sent a blast that went in off the right post for a 2-1 Cane lead. 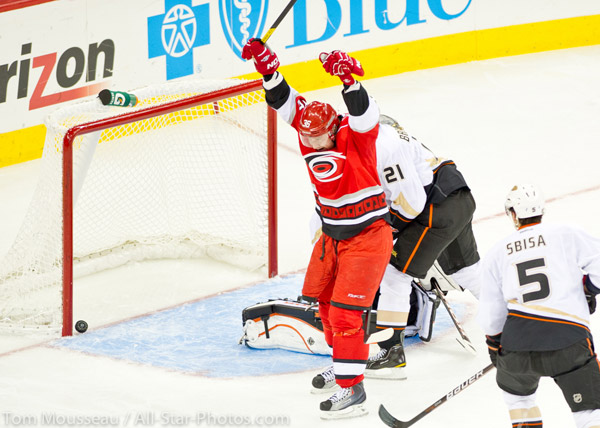 The line of Brandon Sutter, Pat Dwyer and Nodl had a great shift. On grit, speed and sheer determination, they kept the puck around the Duck’s net their entire shift.  Dwyer was almost possessed, constantly moving at full speed, forechecking, banging bodies and shooting.

Late in the period, the Ducks had a weak 2 on 1 but a great block by Bryan Allen earned him a steak dinner from Justin Peters.   If Allen doesn’t make the initial block, it was a sure goal.

With just under a minute to go, McBain took another hard shot into traffic that Hiller made a butterfly pad save.  Stewart was on the doorstep and learned a valuable lesson: play the puck hard when you have an open net. 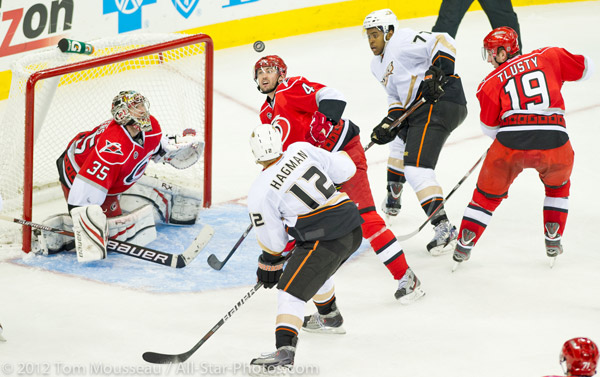 The Canes started the third with back to back penalties.

Sutter was called for hooking at the conclusion of the second and Dwyer batted the puck over the glass right in front of the net.  The penalty kill team did an excellent job with clearing bodies on front of Peters and sending pucks to the boards. Peter’s was controlling the rebounds or deflecting the puck to the corners. 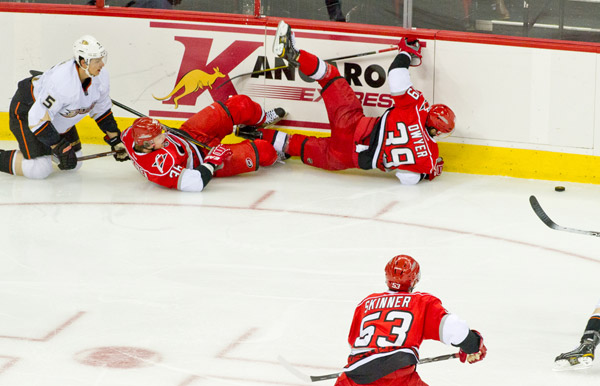 On a bouncing puck right next to the net, Tim Gleason made sure the puck got frozen by Peters and bowled over 2 Ducks just as the whistle blew.

Skinner got called for a careless high sticking penalty after a clear by the Ducks.  While on the Ducks power play, the Canes thought the puck was going to clear the blue line so the forwards started up ice but the puck didn’t clear as Cam Fowler snatched it.  Fowler sent it to Ryan Getzlaf in the corner who centered to Cory Perry camped out in front of Peters.  Peters made the initial save but Perry gently knocked the puck in mid-air over Peters shoulder to tie the game. 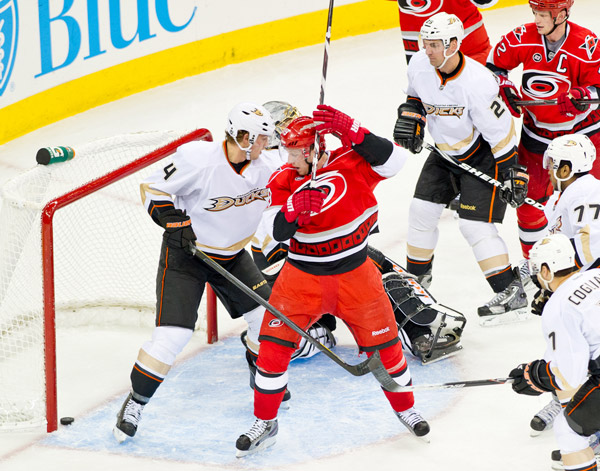 With just under 6 minutes to go Samson batted the puck over the glass for the Canes 3rd delay of game penalty and 4th of the period. It’s hard to score when you play 8 minutes out of 20 with a man down.

Gleason was leading by example on the penalty kill as he was very physical making sure no one in a white sweater was going to be near Peters or have the ability to put a stick on the puck.  His play doesn’t make the score sheet but without it, someone on the Ducks does.

Games goes into overtime with cautious play on both sides.  With an east team playing a west team, both needing points, getting one point is good and the extra point by the other team doesn’t put you farther away in your own conference.

Canes go 0 for 3 in the shootout with only Ducks’ Saku Koivu scoring a great looking goal. 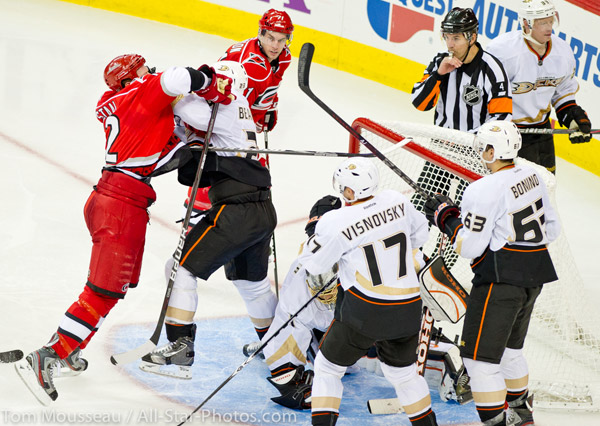 Things to Do in the Garden this Spring