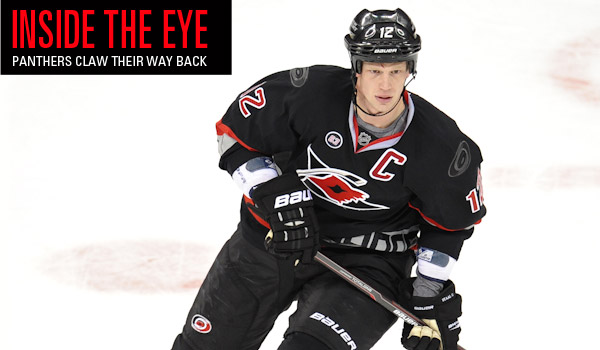 Cary-lina, NC – The Carolina Hurricanes lost a tough one against the Florida Panthers, 3-2 in a shootout at the RBC Center Saturday February 25th.  The Canes continue to hang on to a slim chance to make the playoffs.

It was Military Appreciation night and the Canes organization did a fantastic job.  The special starter of the game was a wounded soldier who used a special skled (a sled used as a skate with a push handle).  The Canes’ starting line up remained on the blue line tapping their sticks on the ice in respect the entire time after the national anthem while he was skledding off the ice.  First class all the way.

The Panthers had been knocked out of first place in the Southeast Division dropping 6 of their last 9 games. The Floridians came roaring out as they got off the first 10 shots of the game.

Tim Gleason got called for the game’s first penalty but it was certainly wasn’t the first “penalty” of the game.  Moments earlier there were at least 2 uncalled penalties in the Panthers’ end as play was getting nasty. The Canes penalty kill team did their job, constantly clearing the puck out of their end 7 times.

The Canes got their first power play when Erik Gudbranson got called for tripping Jeff Skinner right in front of the Canes bench that looked more like he kneed Skinner, but Skinner went down so the call went for tripping.   Staal won the faceoff, Jerome Samson grabbed the puck, tapped it back to Staal who made a sharp pass to Justin Faulk high in the slot.  Faulk sent a slap shot in with only 12 seconds gone in the mane advantage.

The Panthers may have had more shots in the period but the Canes defense was strong on the puck pushing bodies clear and clearing rebounds by Justin Peters.  The Canes forwards forechecking was outstanding especially by Staal and Brandon Sutter.

The Canes got another power play early in the second when Gudbranson took a dumb roughing penalty.  The puck was well out of the Panthers end when he knocked Derek Joslin upside the head.  Maybe it was something he said.  The Canes almost made it 2 for 2 on the power play when Staal threaded the needle and sent a shot off the post.

Gleason and Bryan Allen lead the Canes own department of defense using strength and intimidation.  The Panthers don’t have the number of highly skilled players as other teams but a few are very talented.

Very late in the period, Tomas Fleishman did a dipsey-doodle, in between his legs, out to the outside, back in but Faulk wasn’t fooled and gave a firm check and stole the puck.

With 2 and a half minutes left, Skinner had something to show for his hardwork when he sent a perfect backhand pass from the corner to Jokinen in the sweet spot of the slot and put one up high over Jose Theodore for a 2-0 Canes Lead.

Early in the third, Bryan Allen got called for slashing when he nailed Krystofer Barch on the wrist just above the glove. That had to hurt big time.  The penalty kill team did another excellent job as not only did the Panthers not get a shot off, Staal almost scored another short handed goal.

Pat Dwyer, a key on the penalty kill team.got banged up early, only playing 2:38.  Kirk Muller had Skinner on the kill paired with Staal which makes a very interesting and exciting front end of a PK unit.

Staal had to make a run to the bench for another stick as he broke his on a check in the Panthers end.  As he got the stick on the fly, he collided with Jiri Tlusty, freeing up Kris Versteeg in the face off circle for a pass cross ice to Fleishma for a one timer past Peters.

Five minutes later Shawn Matthais carefully brought the puck up from his blue line, hitting Wojtel Wolski, a Panther for just 3 hours, passing to Jerred Smithson, a Panther for 25 hours but the puck hit Gleason’s skate into the net to tie the game 2-2.

In overtime, on the one scoring opportunity for the Canes, Staal had the puck behind the net, had his centering pass blocked and was loose to the left of the net.  After hacking and whacking by Staal and Tlusty, both got flattened and tempers flared.  The Panthers got what they wanted, Staal off for a matching penalty with Gudbranson and the game going to a shootout.

Skinner had a very nice shootout goal but it wasn’t enough as the Panthers put in 2, keeping the Canes as the only team not to win a shootout in the NHL.