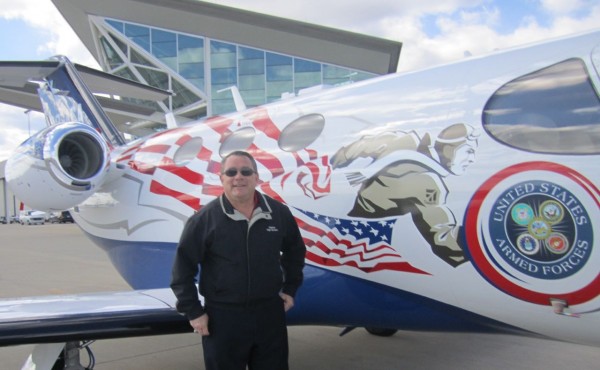 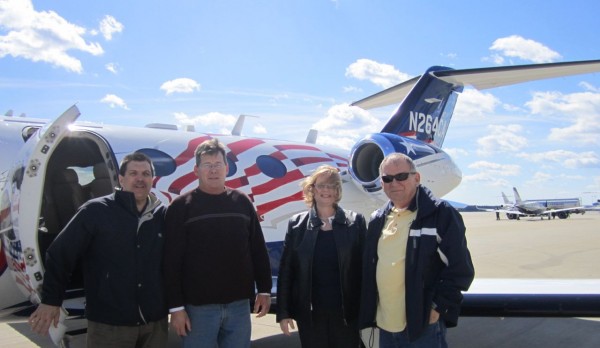 Cary, NC- My friend Ernie Capone alerted me about a ride he got in a special plane last week: Cessna’s “American Patriot” jet plane making an appearance at RDU airport.

The “American Patriot”  Cessna Mustang is a four passenger jet that was specially painted to become part of the Veteran’s Airlift Command in the Fall of 2011.

Cessna donates the cost of crew and fuel to provide free transportation to wounded military and their families.

It’s Cessna’s way of giving back to the soldiers fighting in Iraq and Afghanistan. The plane was showcased at RDU airport here in the Triangle on Saturday Feb 25th.

The “American Patriot” had its inaugural mission on November 10, 2011. It’s described here in General Aviation News:

The unique paint scheme that salutes the men and women who serve or have served in the U.S. Armed Forces. On each side, the “Patriot Defender” character holds a shield featuring the four branches of the Armed Forces as a large American flag unfurls down the side of the aircraft.

When the plane isn’t busy on its missions helping the military, it takes flights to promote the Veteran’s Airlift Command mission.

Veteran’s Airlift Command (VAC) prioritizes veteran’s of the Iraq and Afghanistan conflicts. When soldiers are returned to the US, these flights can bring soldiers and family together during the healing process. They use a national network of volunteer aircraft owners and pilots to complete these missions.

“Many of our veterans return from combat facing devastating injuries and long-term rehabilitation. Many times, they are recuperating hundreds of miles away from family. Our goal at VAC is to be that bridge that brings families together to help our veterans heal,” said Walt Fricke, VAC founder and air boss. “We are fortunate to have Cessna join us in providing our wounded warriors with this crucial service.”

Ernie, a licensed pilot, Cessna employee and Cary neighbor, had hoped to fly the jet, but a tornado warning on the trip between Charlotte and RDU grounded those plans. “I was supposed to fly it over from CLT on Friday but the Wx (weather) was nasty,” Ernie said by email. “I sat right seat and observed one of our highly experienced chief pilots get from Charlotte to Raleigh in about 38 minutes.  The airplane is a pilot’s dream.”

“The cabin will support 4 passengers traveling in comfort at 340 knots, aka about 400MPH, at 35-40,000 feet toward their destination covering around 1100NM (nautical miles).”

“As to it’s mission of goodwill in support of wounded veterans,” Ernie’s note continued, “the plan is for it to fly 2-4 missions per months since the program got underway in late Oct. ’11.  Thus far we have flown 8 missions.  When not in use for this mission, Cessna utilizes the aircraft for field events including demos and static displays.”