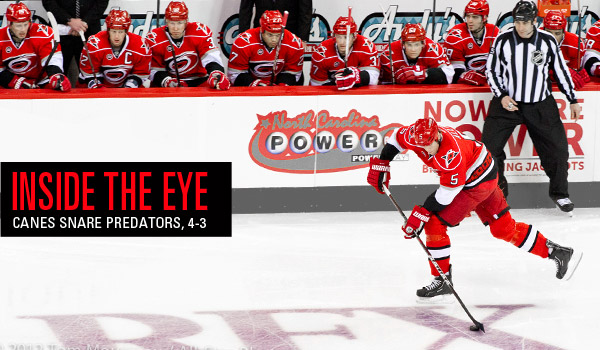 Cary-lina, NC – The Carolina Hurricanes again defeated one of the top NHL teams, the Nashville Predators, 4-3 in a see-saw type game at the RBC Center February 28th.

Eric Staal led the Canes attack with a goal and 2 assists continuing his hot streak over the past 25 games or so.   Cam Ward was back in between the pipes after missing the last few games with a lower body injury.  He looked a little rusty early on but at the end of the game was outstanding.

The Canes dominated play and shots in the first but it was the Predators that struck first.  After a few weak shots, Ward sent the puck into the corner, Gabriel Bourque picked up the puck, skated uncontested behind the net for a wrap around.  Ward made the initial save, Colin Wilson was on the doorstep, took a swipe at the rebound paying dearly as he was hammered in the back, the puck slid over to Craig Smith, who was all alone off the left post for an easy shot into a wide open right side of the goal.

With Pat Dwyer joining one of the larger groups for the Canes: the injured list, the Canes called up Zach Boychuk to play on the line with Jeff Skinner and Jussi Jokinen.  The Predators are a team full of big players.  They faced – backup goalie, 6’6” Anders Lindback, their $49 million starting goalie, Pekka Rinne who is 6’5”, and Hall Gill on defense who is 6’7”.  The goal is only 4’ high so even if they are 8’ tall, it doesn’t matter, just means they have to bend over more.  But they are quick and their long reach came into play at least twice during the game.  The Canes certainly had more of the play in the first.

Nashville has high hopes for the post season and was active in the week leading up to the trade deadline either outright trades or trades for draft picks. Their lineup is solid and well-balanced, with 11 players in double figures for goals, the Canes have 6.  When you have balanced scoring like that, it’s difficult for opposing teams as they usually put their top checking line against your top scorers.

Jamie McBain opened the Canes scoring on a hard slap shot from the right point 5 minutes into the period.   The Canes were doing a good job keeping the puck in the Preds end, Anthony Stewart stole the puck from Wilson, bounced the puck off the boards to himself, then passed over to McBain for the clean shot.   Boychuk had a goal denied when he came down the left side with Skinner in the center drawing the attention.  Boychuk sent a shot destined for the far upper corner but Lindback’s long wing span allowed for a nice glove save.

Midway in the period, Wilson simply out muscled McBain for the puck inside the left faceoff circle.  Wilson took a wrist shot that Ward saved off his chest, Wilson did what every coach in every sport teaches: “follow your shot”, then sent a backhander in the short side.  Nashville then went on a surge of penalties with the first one less than a minute after Wilson’s goal.  The Canes won the faceoff, Jokinen had the puck midway along the boards, passed down to Skinner who attempted a pass in front of the crease.  The puck jumped high hitting Skinners chest, landing perfectly on Staal’s stick who made no mistake about sending it home.

On the next power play, Nashville was trying to clear the puck but McBain made a nice chop to keep the puck in.  Skinner picked it up, quickly passed to Staal along the boards, with Skinner going hard to the net.  Staal passed back to Skinner who shot, Lindback made the initial block but the puck fell in the crease with everyone jabbing, poking and  swiping at the puck.  Tim Brent paid the price for his jab at the puck but was all worthwhile as it squibbed into the net for the Canes’ first lead, 3-2.

Bryan Allen was in the penalty box at the start of the third, finishing the Canes only penalty of the night. With the puck in the Canes end, Allen’s penalty ended.  Staal saw Allen come out of the box, made a pretty lead pass to set Allen up on a breakaway.  Allen’s first shot was blocked but he stuffed the rebound 5 hole for what turned out to be the game winner. Allen hasn’t scored in 94 games and needs to practice his celebration a little more.  I’m not sure what got the Canes bench more excited, the 4th goal, Allen scoring or his attempt at his celebration.

If the Preds were to get back in the game they would have to get more shots and that they did.  Less than a minute later, Bourque made a nice move to bring the puck over the blue line.  He passed over to David Legwand,  up to Jordin Tootoo (any guess on his sweater number:22), who shot was blocked by Ward but the defense failed to clear the puck. Bourque  was just outside the crease for the put back putting the Preds within one with about 18 minutes remaining.

The Predators smelled blood as they poured on shot after shot but Ward was very sharp.  Very few rebounds in the third with the defense pushing bodies away for Ward to have clear sight of the puck.  Martin Erat made a nifty move that completely fooled Jay Harrison but Harrison was quick to recover and shut down 2 Predators in front of Ward.  With 5 seconds to go Brandon Sutter cleared the puck from the Canes zone to seal the win as Mike Fisher (Carrie Underwood’s hubby)  was thinking, but wisely didn’t, of going after Bryan Allen.

Cary Pilot Gets a Ride on Cessna’s “American Patriot” Jet