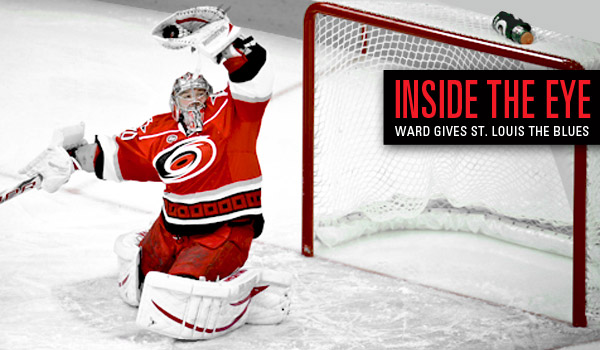 Cary-lina, NC – The Canes won 2-0 as Cam Ward earned his 200th career victory and 20th career shut out against the NHL leading St. Louis Blues. It was the Canes’ first victory in the newly named PNC Arena on March 15th  and it was in front of a sellout crowd.

Blues are Big and Strong

The Blues came into the game with the best record in the NHL with 98 points, winning 45 games and a very selfish, 139 goals against.  The Canes are ties for fourth most in goals against at 211, but Ward and the entire team did a phenomenal job  against a very strong team, both in physical size talent and speed to earn the shout out.

Jeff Skinner joined the top line with Eric Staal and Tuomo Ruutu and all 3 had a great night.  Skinner was very aggressive on offense leading the Canes with 6 shots on net.   Ruutu got called for tripping early in the first putting the Blues on the power play.

The Blues are in constant motion with all 5 skaters moving all the time.  That helps explain why they’re so successful on the power play and while playing even strength.  Midway through their power play, Chris Stewart got called for tripping, evening up the sides at 4 on 4, as the Blues got off 4 shots on the shortened man advantage.

On the Canes shortened power play, Skinner had 2 excellent chances only to be stopped by Brian Elliott.   The Canes called up defenseman Bobby Sanguinetti for his home debut and had him on the second power play unit.  He did very well and was not bashful in sending shots on net.  He’s a very disciplined player with just 14 penalty minutes all season with the Checkers and played a smart game.

Brian Allen Has a Strong Game

The second period was a continuation of the first, with the fast pace up and down the ice with both goalies making save after save. Each team had 3 shots ring off the posts, which do not count as a shot on goal.

The Blues use their physical size very well.  They’re big, strong and fast, and are quick to double team certain players.  The Canes bench must have realized that as they opened the ice late in the period. That allowed several Canes to get off some decent shots.

Very late in the period, Staal got called for a slash on one player and a trip on another. No doubt it had to be a reaction to the beating he was taking on every touch of the puck.

Shortly after the 4 minutes of penalty time started, Alex Pietrangelo got called for interference by hitting Brian Allen from behind.  It looked like they were trying ro get Allen into an altercation but he smartly skated away. The Canes penalty kill units were outstanding as they frequently were clearing the puck down ice killing time.

Both teams opened the third with 4 skaters because of the penalties late in the second.

The Blues started to lose their composure, possibly because the Canes were equaling them in every aspect: hitting, scoring chances and speed.

The Canes were on the man advantage several times and had their opportunities but couldn’t put the puck in the net.  On one semi break-away, Tim Brent made a great backhand shot that looked so good Brent thought he had the goal.  The puck hit the cross bar, then off the left post, bounced behind Elliott sliding to the outside of the goal.  Andreas Nodl followed up with what he thought would be a tip in only to have Elliott make a great pad save that was pure reflex reaction.

Late in the period, Nodl goosed the puck up to Chad LaRose deep in the corner.  LaRose carried the puck around the net for a wrap around  that hit the stick of Ian Cole jumping up over Elliott’s shoulder for a 1-0 Cane Lead.  A few minutes later, Brian Allen got the puck up to Skinner, for a quick 2 on 1 with Ruutu.  Ruutu went wide, Skinner tried a toe drag just as Jason Arnot dove trying to hook Skinner’s stick.  Skinner lost the puck but made an unbelievable touch with his right skate to put the puck on his tape for a goal sealing the Canes impressive win.