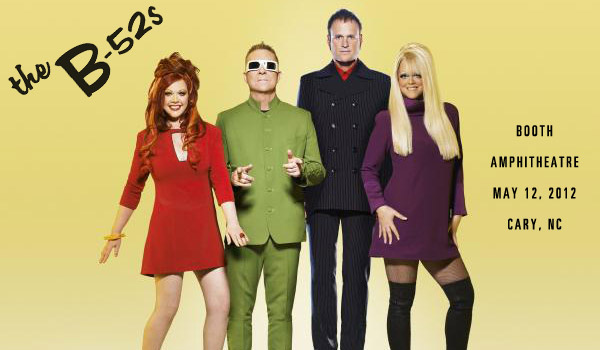 Cary, NC – Booth Amphitheatre has announced that the B-52s wil headline the line-up for Band Together NC, a benefit on Saturday May 12.

The B-52s might be America’s most popular party band, with hits including “Rock Lobster,” “Love Shack” and “Private Idaho.”

Southern Culture on the Skids

Also appearing on the bill is Southern Culture on the Skids (SCOTS). From the website:

Long the bards of downward mobility, Southern Culture on the Skids have always embodied a sleazy, raucous, good-natured, good-time take on the culture of the South.

Since 1983, when they formed in Chapel Hill, North Carolina, SCOTS have played their unique hybrid of Americana, surf, R&B, rockabilly, and swamp pop (the band describes their sound as “toe sucking geek rock – kinda weird, but it feels good when you’re doing it”), all the while driving fans into ecstatic, sweat-drenched paroxysms of joy.

The opening act is Greensboro band Big Something, winner of Last Band Standing.

Big Something has been compared to Widespread Panic, Springsteen and Rush – hard driving rock with a jazzy edge. The synth, guitar and sax are upfront with a strong beat and drawling lyrics.