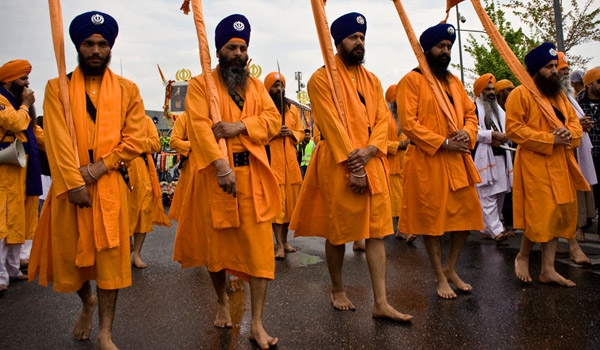 Cary, NC – Did you know that the second most commonly spoken language in Cary is Hindi? For those of you not familiar with Indian Holidays, we have a report direct from India on the spring festivals of Basakhi and Ugadi.

The city of Bangalore is the capital of the state Karnataka, which is located in Southern India. The people of this state predominantly speak the language Kannada and consequently are referred to as Kannadigas.

Ugadi, which is on March 23 this year, is a very important festival for the Kannadiga’s and it is celebrated with much pomp and religious fervor.

The word “Ugadi” comes from an amalgamation of two words in the Kannada language – “Yuga” (era) and “Adi” (beginning). It is celebrated on the first day of Spring.

It is very auspicious to the Hindus as it is considered as the start of the Hindu Lunar Calendar  and it  is considered the day on which the Creator – Lord Brahma created the universe.

This day is started with a special Puja (service/devotion) and rituals and as all celebrations in India go – with lots of food, decorations and other festivities.

Pujas are performed to invoke and worship the Hindu gods for health, wealth ,peace and prosperity an, success in every venture. New ventures are said to be prosperous if started on this day. It is the season for new life to bloom everywhere and this signifies new beginnings.

The rituals followed are many and vary from region to region and family to family.

In preparation for Ugadi, Spring cleaning of the house is done. A new coat of paint applied and decorations are put up. Some of the common decorations are stringing together of mango and neem leaves and putting this up on doorways of homes. Decorating the house with flowers is common – especially the puja room and, the tulsi plant in the front yard of the home. The jasmine flower is used in decorations as this is the time for the flowers to be in bloom.

Decorating the front yard with rangoli is done using traditional designs and coloured powders. This can also be done using flower petals, leaves or even lentils and grain. 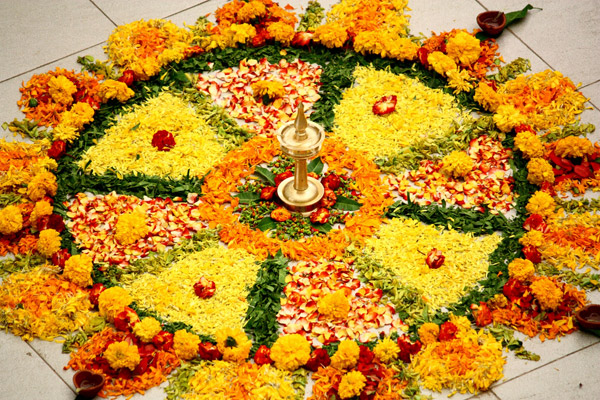 On the Day of Ugadi

All family members wake up early in the morning  apply oil all over their body and have a shower. They wear new clothes and ornaments. It is important to wake up before the sunrise so that they are ready to be blessed by the rays of the sun.

Thereafter they gather for the Puja which is done by the head of the family. Gold ornaments, new clothes and fruits are placed before the idols of the gods in the puja room to be blessed.

The women prepare a festive meal consisting of obattu – a type of sweet flat bread prepared with jaggery (unrefined sugar made from palm sap), all-purpose flour and gram flour; masala vada ( savoury cutlets of chana dhal or lentils – deep fried in oil), kosambari ( salad of cucumber and lentils);  payasa ( made with milk/coconut milk, jaggery, new shoots of cashew nuts and lentils), rice, sambhar and, much more!

The meal is eaten on Banana leaves in the traditional way.

Bevu (neem) and bella (jaggery) is given to the family members. This symbolizes that life is filled with both sadness and joy signified by the bitter neem and the sweet jaggery and we should take on both without complaint. It represents the basic Hindu philosophy of accepting your “Karma” and appeasing the gods for decreasing your bad karma and increasing your good karma – so that you can attain moksha, reversing the cycle of rebirth.

Here’s wishing everyone an Auspicious Ugadi!

Baisakhi is one of the major festivals of Sikhs and is celebrated with lot of enthusiasm  in the state of Punjab – and all throughout the world where there is a significant Sikh population.

People of North India, particularly Punjab, thank God for the good harvest. For the large farming community of Punjab, Baisakhi Festival marks the time for harvest of rabi (end of winter) crops and they celebrate the day by performing joyful bhangra and gidda dances.

For the Sikh community, Baisakhi Festival has tremendous religious significance as it was on a Baisakhi Day in 1699, that Guru Gobind Singh, the tenth Sikh Guru laid the foundation of Panth Khalsa-the Order of the Pure Ones.

According to English calendar, the date of Baisakhi corresponds to April 13 every year and April 14 once in every 36 years.  This year it falls on the 13th of April. This difference in Baisakhi dates is due to the fact that the day of Baisakhi is reckoned according to the solar calendar and not the lunar calendar. Baisakhi is celebrated all over India under different names and different set of rituals and celebrations. Baisakhi date coincides with Rongali Bihu in Assam, Naba Barsha in Bengal, Puthandu in Tamil Nadu and Pooram Vishu in Kerala.

How Baisakhi is Celebrated

As the festival has tremendous importance in Sikh religion, major activities of the day are organized in Gurdwaras (places of worship).

People wake up early to prepare for the day. Many also take bath in the holy river to mark the auspicious occasion. After getting ready people pay a visit to their neighbourhood gurdwara and take part in the special prayer meeting organized for the day. The congregation receives specially prepared kara prasad (sacred pudding) or sweetened semolina. This is followed by a guru ka langar (community lunch).

Later, there is a Baisakhi procession under the leadership of Panj piaras. At the head of the procession are the Panj Piaras, symbolizing the journey made by the five fearless devotees from their homes to Anandpur, to be baptised by Guru Gobind Singh. Baisakhi processions are attended by men, women and children alike with faith and enthusiasm. The procession moves through major localities of the city and is welcomed by citizens and members of social and cultural societies. Colourful bhangra and gidda dance and there are mock duels are performed during Baisakhi processions. Another fascinating part of Baisakhi celebrations is the accompaniment of drummers, bands playing  and devotees singing religious songs and men swinging swords.

Loud Sikh chants of “Bole so nihal”, “Deg teg fateh” and rhythmic chants of “Sat nam” and “Wahe guru”  ring out from the middle of the singing and drumming. Some men may wear the headgear (bana) of Guru Nanak, others that of Guru Gobind Singh. At the end of the ceremony, Sikh religious leaders strive to promote the feeling of charity amongst people, especially children, in honor of Guru Gobind Singh.

In some places, especially Punjab, there are celebrations leading up to Baisakhi.

Celebrations in the Fields

Since Baisakhi is also celebrated as a harvest festival, farmers in Punjab celebrate Baisakhi with energetic performance of bhangra and gidda dance. Men and women clad themselves in their traditional Bhangra dress and dance to the beat of dhol in a joyful festive atmosphere.

Festival of Baisakhi is celebrated as a Thanksgiving Day by the farmers. People wake up early on the day and take bath in rivers or pond water and pay a visit to the temple or gurdwara (Sikh worship place). Farmers thank god for the bountiful harvest and pray for prosperity in future also. Many people also perform charity on the day as a custom.

Colourful Baisakhi Fairs are organized at several places in Punjab to mark the harvest festival of Baisakhi. Performance of bhangra and gidda dance besides other recreational activities make Baisakhi melas (gatherings) major crowd favorites. People also indulge in shopping and eating spree in the numerous stalls set up in the fairs.

The date of Baisakhi is significant as it marks the sun’s entry into Mesh Rashi (astrological term). For this very reason, many people also know Baisakhi as Mesha Sankranti. The auspicious date of Baisakhi is celebrated all over India under many different names

For the agriculturally rich state of Punjab and Haryana, Baisakhi marks the time for harvest of rabi crops and is therefore extremely significant for the farmers. Baisakhi Festival is also celebrated as a Thanksgiving Day festival in these states.

Baisakhi is of major importance for the people following Sikh faith. As it was on a Baisakhi Day, in the year 1699 that the Tenth Guru of Sikhs, Guru Gobind Singh founded Khalsa Panth or the Order of Pure Ones and gave a unique identity to Sikhs. On the same day the guru administered amrit (nectar) to his first group of five disciples making them Singhs, a martial community. By doing so, he eliminated the differences of high and low and established that all human beings were equal.

The day of Baisakhi is of significance for the Hindus as it was on this day in 1875 that Swami Dayanand Saraswati founded the Arya Samaj – a reformed sect of Hindus who are devoted to the Vedas for spiritual guidance and have discarded idol worship. Besides, Baisakhi day is of relevance for the Buddhists as Gautama Buddha attained enlightenment and Nirvana on this auspicious day.