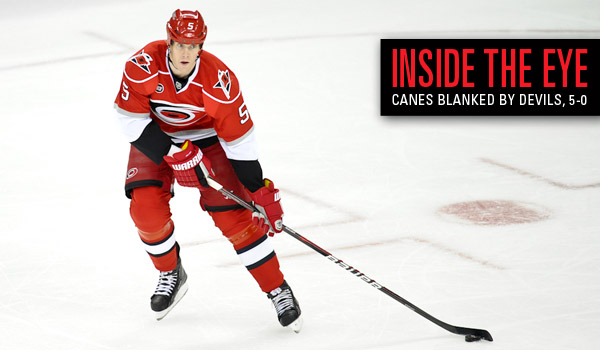 Cary-lina, NC – The Carolina Hurricanes were on the ice with the New Jersey Devils Saturday March 31, at the PNC Arena. The Canes had a major let down in play is what may be the result of getting eliminated from the playoffs the night before.  The Devils are a strong team and dominated in the 5-0 win for Martin Brodeur’s 119th career shutout.

Brian Boucher started in goal and was busy early as the Devils seemed possessed.

New Jersey is first (15) and the Canes (12) are second in the NHL for shorthanded goals.  Both teams traded off penalties early with the Devils having the better offensive chances, and a few shorthanded chances, but the Canes defense was very physical in front of Boucher.

Late in the period Jeff Skinner did one of his favorite moves of skating towards the net then turns his back to a side skate 360.  Just as he started the reversal, Anton Volchenko pulled Skinner down. In a Canes fan’s eyes it was a penalty, by the Devil’s eyes it was a good play. No penalty was called by either referee.

On the Devils’ clear, Skinner tagged Volchenko along the boards near the penalty box.  Skinner wasn’t happy about the penalty and let the refs know. The Devils had four close range shots where Boucher got twisted like a pretzel making several saves but allowed one rebound too many as David Clarkson put one in for a 1-0 Devil lead.

After the goal, while skating to the bench from the penalty box, Skinner must have continued to mention how “disappointed he was” about the call earning him another 2 minutes for unsportsman like conduct with only 22 seconds remaining in the period.

With new ice, the Devils had just what they wanted for the back end of the power play.

They again had excellent passing, speed and movement that resulted in several shots with Petr Sykora making a nice pass to Ilya Kovalchuk just inside the blue line for a zinger of a slap shot that beat Boucher.  It was jast 6 seconds after the power play which shows how important it is to get in the play after serving time.

A few minutes later, Derek Joslin couldn’t handle a bouncing puck in center ice but Steve Bernier did, that resulted in a 2 on 1 with Ryan Carter putting a snap wrister past Boucher for commanding 3-0 lead. I guess the fact it was an obvious offsides didn’t matter.

The game could have turned ugly real fast after that goal but fortunately cooler heads prevailed.  Eric Staal started an impressive scoring opportunity with Skinner add Drayson Bowman with Bowman getting off the shot. Staal’s momentum, as well as a shove from behind, had him fall on future Hall of Famer Brodeur for a weak penalty.  Staal is a force on the penalty kill but the forwards, especially Brandon Sutter, did a good job.

Late in the period, the Canes were sloppy and not aggressive on the puck. Patrik Elias cleanly won a face off with the puck going right to the tape of Petr Sykora who sent a quick slap shot past Boucher for a 4-0 lead.

The Devils line of Zach Parise, Kovaluchul and Travis Zajac put on a passing clinic that resulted in an easy goal by Parise.

Kirk Muller shuffled forward lines putting Skinner with Sutter and Pat Dwyer.  Something or anything to put some spark in the team and give the fourth sellout in a row something to cheer about.  Jussi Jokinen was sent to the fourth line with Tuomo Ruutu, Bowman and Tim Brent now making the third line.

The Canes were trying to find a solution to generating some offense and avoid a shut out but that wasn’t going to happen. The Canes had to overcome a team with a mission and the mental game and appeared to have given up on both.