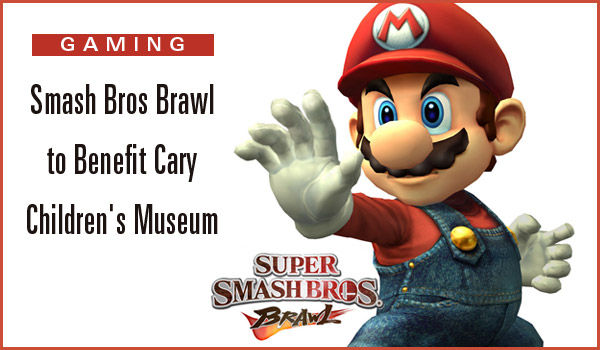 Cary, NC – GameTruck Triangle will celebrate their first anniversary with a Super Smash Bros “Brawl Tournament” on May 5th . Part of the proceeds will go to help build the Downtown Cary Children’s Museum.

Gaming. On a Truck.

Lizette Watko, and her husband Eric co-own the Cary-based GameTruck Triangle business which hosts innovative birthday parties and camps in their traveling lime green truck. The truck is equipped with multiple large flat screen TVs and consoles for playing multi-player video games. The Tournament is a natural extension of their business. (See Cary Citizen story)

Lizette came up with the idea to have some proceeds benefit the Children’s Museum because the museum will focus on innovative technology and kids, just like GameTruck.

“We can’t think of a better way to celebrate our first year anniversary than with a tournament playing the most popular video game in our trucks,” said Lizette Cruz Watko, Owner of GameTruck Triangle.  “We hope young and old will joins us, and help us raise funds to support the creation of the Downtown Cary Children’s Museum”, she added.

The Brawl Tournament will be a one vs one tournament and it will take place inside GameTruck’s mobile video game theater in the GameStop Crescent Commons Shopping Center parking lot.

I queried Lizette about the rules (being a non-gamer) and she gave me the parameters that will apply so there will be fair play and NO CHEATING:

The basic Rules (this will mean something to gamers, but was “Greek to Me”)

3 stocks 8 minute, double elimination, best of 2 out of 3 matches

Inside the Eye: Canes Blanked By Devils, 5-0