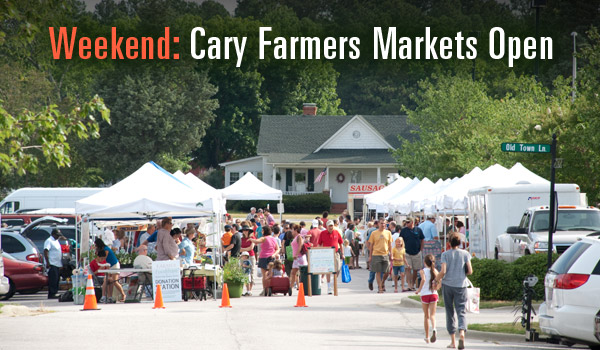 The CaryCitizen Calendar of Events is edited by Lindsey Chester. Photo by Hal Goodtree.

Cary, N.C. – Warm weather is here and our local farmers markets are all set to hold grand openings this Saturday, April 7. You’ll find locally grown produce, meat and seafood along with a healthy portion of entertainment.

The Cary Downtown Farmer’s Market returns this year to the Heart of Cary with its new location at the corner of Academy and Park in downtown Cary. For several years the market was forced to locate up the road in Chatham Square Shopping, during the Cary Train Depot renovations. This resulted in poor visibility and reduced attendance.

Manager Michele Blackley says Downtown Development Manager Ed Gawf will officially open the market on Saturday.  Live music from Paula Snyder is planned for the opening. Phil Shepherd is heading up entertainment, with the use of the Town of Cary’s portable stage, this summer will feature an assortment of bands and other performing arts.

The market will be giving away new market bags to the first 25 visitors on Saturday, and then the bags will be for sale. Twenty four vendors have signed on to be a part of the downtown market, the space can accommodate up to 29. Included in the mix is  mushroom grower, herbs and perennials, produce (9 vendors) as well as some crafters, candle sellers and three bakers (one of whom is offering gluten-free products!).

The Western Wake Farmer’s Market is still at the old location on Morrisville Carpenter Road in Cary within the Carpenter Village subdivision. Over the winter, there were talks of a move, but so far, they are holding steady in their current location.

Opening day at the WWFM will be  “Egg ” themed and includes an Easter Egg Hunt for the kids.

Whole Foods Market of Cary will be on hand to celebrate the season opening with recipes featuring local eggs and produce from market vendors.  Market goers are encouraged to stop by the Education Tent for a sample. Stevan Jackson will be in the Music Tent with lively farmers’ market melodies.

Throughout April, WWFM will host a wide variety of educators and musicians. Educators include Advocates for Health in Action (April 14), North Carolina 10% Campaign and the Cary Dinner Fairy (April 21) and Chef Scott Crawford of Herons Restaurant at The Umstead Hotel and Spa (April 28). Market shoppers will be entertained by the musical styling of Andrew Robbins (April 14), Kyle Scobie (April 21) and CityFolk (April 28).

DJ’s is known for their fabulous Pick-Your- Own strawberries and pumpkins, the Jones family also runs a great little farm stand down on Davis Drive near Salem Baptist Church. They should be picking berries soon (mid-April) and will begin selling produce again. Official opening date is not yet set for this stand- all depends on how soon the berries start coming in!