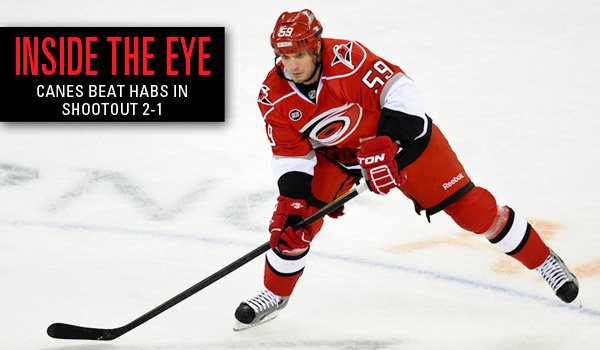 Cary-lina, NC – It was as close to poetic justice in hockey as you can get. Captain Eric Staal scored the lone goal to win in the only shootout all season for the Canes.

Hopefully this is something they can build on for next season. Up until this game the Canes were the only team that did not win a shootout in 2011/12.

Both Cam Ward and Montreal goalie Peter Budaj stopped everything with Ward making some circus saves.  The Canes got on the power play early when P.K. Suddan got called for a cross-checking penalty only 32 seconds into the game.  The Canes got off several shots but few were able to get through to Budaj as the Montreal defense did a good job blocking shots and clearing the Canes out from the front of the crease.  Staal got called for tripping on a 60-40 call meaning, yes, his stick touched the boot of a skate but it was a light touch.

Either give the victim Canadien skating lessons or give him credit for drawing the penalty.  It was on this power play that Ward made some fantastic saves.  Montreal got off several shots and his old buddy Cole was making Ward’s life miserable with no one capable of clearing him out in front.  Ward got into the act by pushing Cole from behind and even using his stick.   Late in the period, on a faceoff to the left of Ward, Cole and Joni Pitkanen were jostling for stick position. Pitkanen did his job but his follow through caught Cole in the mouth for a 2 minute high sticking penalty.  Two and a half years ago Cole and Pitkanen were involved in a trade that sent Cole to Edmonton only to have him come  home a few months later.

Early in the second, Chad LaRose  got called for a hooking penalty deep in the offensive zone on an easy clear by Montreal.   Spending 2 minutes in the penalty box had to be better than 2 minutes on the bench with Muller at that point.  Shortly after the penalty ended, the Canadiens were bringing the puck up the left wing side if the ice.  Mike Blunden skated to the top of the faceoff circle near the boards and took a shot.  Ward was on the corner of the crease, cutting down the angle for an easy save but the rebound went right to the stick of Blake Geoffrion who circled the net for a rare wrap-around goal on Ward.  Mrs. Emerson always says Cam plays out too far  – but on this play, Ward did his job and made the initial save. Ward tried to get to the far corner to stop a wrap-around and he appeared to be surprised that Geoffrion went around untouched.

Midway through the period, the Canadiens got called for too many men on the ice as it looked like a team meeting in front of their bench.  On the power play, the Canes had good puck control up top with Pitkanen passing to Jamie McBain.  McBain passed down to LaRose to the right of the goal.  Whether it was poor coverage or lack of respect, LaRose didn’t care as he quickly went to the goal for a stuff, his initial shot was blocked, then bodies merged. LaRose was able to put home the loose change to tie the game at 1 all.  Late in the period, Ward made a phenomenal save on a breakaway by Tomas Plekanec.

The third period was pure entertainment with both teams trying to be aggressive but cautious not to give the other team any break.  Early on Ward again made a great save on a semi breakaway on Andrei Markov who grabbed a pass at the blue line behind the Canes defense. P. K. Suddan obviously didn’t get the memo to be cautious, as he was called for hooking at 7:45. Then 5 seconds after he got out of the box, got called for tripping Jaroslav Spacek on a real dumb penalty.

The Canes got plenty of shots off on the power play but nothing was able to get passed Budaj.  On even strength, the line of Skinner, Tuomo Ruutu and Jokenin were very strong.  Ruutu was banging bodies reminding everyone this line is not just about pretty faces, speed and skill.  Even Skinner had one of the bigger hits of the night delighting the fifth sellout crowd in a row.

Late in the period, Spacek got called for holding that had everyone on edge because of Montreal scored, that could be the game. Staal has turned into a great penalty kill player and stole the puck at the blue line, got hooked by Markov on his initial stride but still was able to make a break for the Canadien’s goal.  Just as he shot, Plenkanec slashed Staal for a second penalty.  Problem was only the sellout crowd saw the penalty, the two refs missed it but Staal was sure to give them a friendly reminder to look at the replay above.

That play did allow the Canes to play 4 on 4 but that lasted only 27 seconds as LaRose took his second poor penalty giving the Canadiens a great chance to seal the game.  The defense was outstanding with Bryan Allen, Justin Faulk, Jay Harrison and Tim Gleason all stepping up.   Gleason may have stepped up a bit too much as he got called for tripping at 19:47 giving Montreal a 15 second 2 man advantage that ran into the overtime.

Every single Cane on the ice gave their all in OT.  Everyone on the bench was shouting words of encouragement and advice.  As the game ended in a 1-1 draw, the exhaustion was evidence that every player on both teams wanted this win.   On to the shootout with Ward making a save on the last Montreal shooter, his good friend Cole setting up Staal.

Staal hasn’t had much success on shootouts and wanted this one in the worst way.  He skated down on the right, swept in front of the net going left, with Budaj following but Staal changed direction with his stick and sent one in on the right side exploding the sellout crowd in one last cheer.

Earlier in the day, Eric Staal was named Most Valuable Player of the team for the third time by the Hockey Writers Association and Jay Harrison won the Josef Vasicek Award (formerly Good Guy Award) for cooperation with the local media.

This was the last home game of the season and will be the last coverage for the Canes this season.  I hope these articles have been helpful.  I try to present these as if you were at the game – but nothing can compare to being there.

The atmosphere inside the PNC Arena is electric and the game is much more exciting to watch in person than on TV.  As with all sports, going to the game allows you to watch so much more than just what’s on camera.

Thanks to Matt Young, my editor at CaryCitizen, and to publisher Hal Goodtree. Thanks also to photographers Tom Mousseau and Suzie Wolf for great coverage of the season.

My goal has been to provide readers with my take on hockey and help support two great organizations in our community: The Carolina Hurricanes and CaryCitizen.com.

Fashion: Dress Up Your Spring with Color

Spicing Up Herbfest: The People’s Pharmacy
Scroll to top