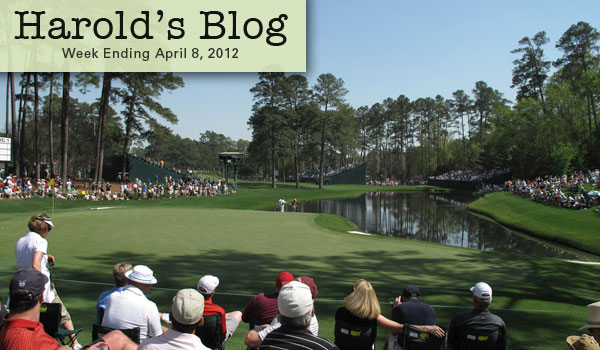 From the blog of Cary Mayor Harold Weinbrecht, covering the week through April 1, 2012. Photo by Keith Allison.

Cary, NC – This was a very short week for me since it was a vacation week. Most of my week was spent in Augusta, Georgia.

Monday I was joined by several dignitaries in the groundbreaking of Fire station #8 at Mills Park.

Afterwards there was a small reception with the more than 50 attendees which were mostly fire fighters, police officers, and town employees.

Tuesday I headed to Augusta, Georgia for my 34th year of working at the Masters Golf tournament. I am honored to be a volunteer at the Masters which is one of the greatest sporting events in the world. The following are some of my memories that I took away from this year. Some aren’t even golf related:

It was a great tournament! I returned Sunday night fully charged and ready to tackle mayor and work duties.

In the mail this week I received a letter from State Treasurer Janet Cowell saying that Cary was chosen as a winner in the 2011-2012 State Treasurer’s Award for Excellence in Accounting and Financial Management. The letter touted our responsible fiscal management and said that an award will be presented at a future council meeting. Just another accolade for the best staff in the state!

Next week includes a meeting with Triangle area mayors, dinner with the Cary NC delegation, a meeting of the mayors and the Wake County school board, a staff meeting to be briefed on proposed budget items, a litter sweep, and several other meetings and events.

Well that is all for this week. My next post will be on Sunday, April 15th. Please feel free to email me with a comment. Email all Town of Cary questions or comments to Harold.Weinbrecht@townofcary.org. Email personal comments to augustanat@mindspring.com.