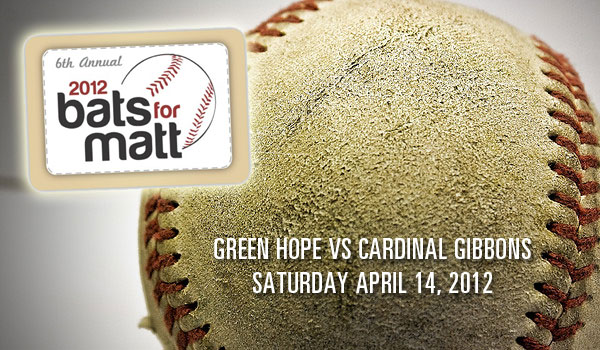 Cary, NC- Bats For Matt is this Saturday, April 14, 2012.  It’s much more than a baseball game between area high schools (Green Hope and Cardinal Gibbons). In its sixth year, the event raises money and awareness to fight lymphoma, a disease that took Matt Cossa from his friends and family in 2006.

Every year since Matt’s death his friends and family have rallied to raise money that benefits the Duke Cancer Institute. To date, more than $125,000 has been raised. This year in addition to the game that will be held this coming Saturday April 14, the Matt Cossa Memorial Foundation held their first Gala and Silent Auction in February and  their second 5K Run in March.

Matt Made a Difference

Matt was a large part of the Green Hope High School community, starting there as a freshman in its inaugural year.

An All-around athlete, he  lettered in football, basketball, and baseball. His accomplishments included 4 years as a varsity starter on the GHHS baseball team, and he made All-Conference three times. He was instrumental in starting the Green Hope Roller Hockey Club.

Matt was a member of the National Honor Society as a junior and senior. He graduated with honors with a 4.5 GPA in 2003. From there he went on to attend the University of North Carolina at Chapel Hill. As a junior, Matt was accepted into the UNC Kenan-Flagler Business School just prior to losing his long battle with Hodgkin’s lymphoma in the spring of 2006.

“We all loved him dearly and miss him a lot.  We would just hope that we could do everything we can so that as few people as possible can be affected by this disease.”

More Than Just A Game

The family’s ties to Green Hope High School still run deep. The event will take place at Green Hope, who’s varsity team will take on rival Cardinal Gibbons in competition that begins at 1pm. Gates will open at noon.

Don’t worry if baseball isn’t your thing- there will be a magician performing, music, Danny’s Bar B Q, an inflatable obstacle course and a silent auction.

Checks should be made out to the Duke Cancer Institute, add “Matt Cossa Memorial” in the memo section of the check and mail the check to: