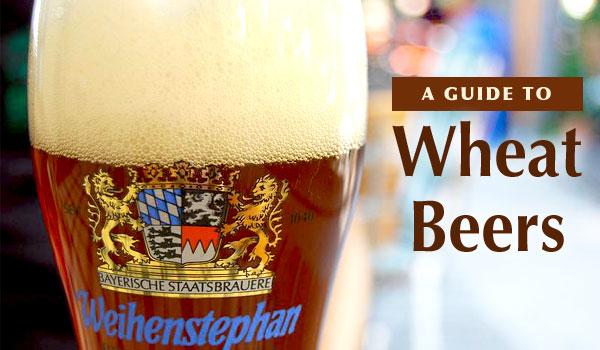 Cary, NC – Wheat beers are seen everywhere these days. They are low hopped (as in “not bitter”), tasty – often banana-y, straw-colored and generally hazy gold in color. Herewith, just in time for Spring, is my guide to enjoying the pleasures of wheat beers.

Wheat Beers: Don’t Be Witless, Be a Weiss Guy

Wheat beers are good to try if you want to have a first foray into the beauty of craft beers. They aren’t real rich and dark, like stouts. They aren’t crazy high in alcohol like Belgians (not the people – the beer).  They don’t make your tongue split with hops like an IPA. They aren’t overly fruity, which is always a plus with me. Brewers occasionally add tastefully mild spices and citrus peels to their concoctions.

They are also a nice sipping style as the weather warms.

If you see these words in the name of a beer – it most likely means there’s wheat in the recipe.

“Hefe” means “yeast” in German. And there’s a reason for the prominent use of the word “yeast” in this beer style. Wheat beers feature special yeast strains which give them their distinctive banana (some say bubblegum) flavor.

The W words – White, Wit, Weiss, Weizen refer to the use of wheat in the recipe. For the record, a rule of thumb for brewers when making a wheat beers is about half barley, half wheat. Many wheat beers are not filtered and thus have a cloudy look. The countries that perfected the wheat beer processes include Germany, Holland, Belgium and France (we’re talking about beer..big surprise eh?).

Weihenstephaner Hefe Weissbier. If we can say that Pilsner Urquell (Czech Republic)  is the father/mother of all pilsners and lagers that put American beer on the map 100 years ago – we need to give Weihenstephaner due props in the wheat world. One reason is that it is the world’s oldest brewery.  I mean ancient. Some beer historians claim the year to be 768 AD.

The bottle label claims 1040 AD to be the birth of the brewery – just to be sure – as there is documented evidence of an actual brewery license that names the brewery in 1040. Whatever. There’s no brewery that’s even close in age.

The beer I tasted for this article – Hefe Weissbier – is downright delicious. Not overwhelming to the wheat novice. Cloudy and straw colored. Banana and lemon hints. Even a little clove. Not a hint of bitterness to my palate.

Weeping Willow Wit. Fast forward to 2008. And travel from Bavaria to our back yard in Kinston, NC.  Peace. Love. And Beer is their motto (it’s mine too). And being a homebrewer, I can relate to the desire for these local brewers to have wanted to move from homebrewing to commercial microbrewing.

I tried their Belgian Style Wit.  It is cloudy and amber-straw colored and has an adequate head. Tastes of citrus and coriander (there’s orange peel and coriander actually in the brew). Real nice.

Leikeim Dunkle Weiss. Once you’ve graduated from the basic wits and weisses and hefes…try this one. While not high in alcohol (5.5% by volume) this is a big boy/big girl beer. It’s rich, but not like a porter. But it does have that toasty brown beer “nose”.

And it even comes in those flip-top (“Grolsch-style”) bottles we homebrewers love to re-use.

Leikeim Brauhaus is one of the largest German breweries with a long tradition.

The beer is brownish copper and has a tan head. The aroma has a hint of cloves and some citrus. Nice going down. Not harsh at all, like wheat beers should be. I drank this paired with home-made ham and split pea soup, which worked.

I wanted to give Saisons a little press here, since the weather is warming up.

Saison is French for “season”. They are traditionally fermented at higher temperatures than lagers and ales and are a style that brewers without fancy equipment like to try this time of year, since the ambient temperature in the brewer’s garage is about right now. Many saisons are made with wheat.

Aviator Brewing Company in Fuquay-Varina makes a nice Saison Farmhouse Ale. And by the way – Triangle Wine and Beer Company  in Morrisville is having a Habanero Saison tasting sponsored by Aviator Brewery on Saturday, May 26. Gotta try that.

A herd of buffalo can only move as fast as the slowest buffalo. And when the herd is hunted, it is the slowest and weakest ones at the back that are killed first. This natural selection is good for the herd as a whole, because the general speed and health of the whole group keeps improving by the regular killing of the weakest members. In much the same way, the human brain can only operate as fast as the slowest brain cells. Excessive intake of alcohol, as we know, kills brain cells. But naturally, it attacks the slowest and weakest brain cells first. In this way, regular consumption of beer eliminates the weaker brain cells, making the brain a faster and more efficient machine! That’s why you always feel smarter after a few beers. – Cliff Clavin