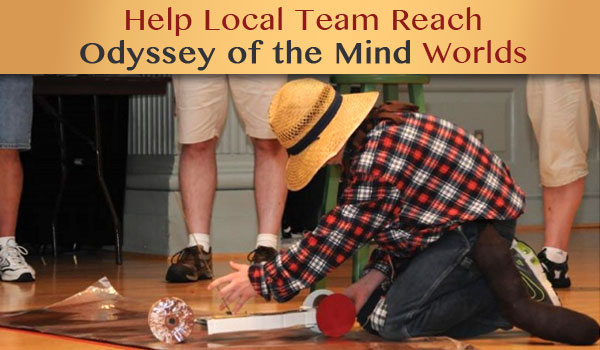 Story from Morrisville Odyssey of the Mind. Photo from Odysseyofthemind.com.

For only the third time in its school’s history, a team from the Morrisville/Cary area has made it to the World Finals for Odyssey of the Mind.

Odyssey of the Mind World Finals

The fifth-grade team won both the regional and state finals, which qualifies them to compete in the World Finals at Iowa State University in Ames, Iowa in late May.

At the World Finals, over 750 teams from all over the US and from over 20 foreign countries will compete.  The team will be meeting and competing with other teams from Canada, Hong Kong, Poland, Singapore, and many more.

Odyssey of the Mind is a program in which teams compete to design and carry out an original solution to a problem that requires creativity, communication and collaboration. The competition includes divisions for grades K-5, 6-8, 9-12 and college.

The team’s problem is called, “Ooh-Motional Vehicle”.  The team had to design, build, and drive a vehicle that will travel a course where it will encounter three different situations.  The vehicle needs to display a different emotion for each encounter and one that will cause the vehicle to travel in reverse, all during an 8-minute presentation.

The emphasis of the problem is on the technical risk-taking and change of emotional appearance of the vehicle. All construction, script writing and costume design is completed by the team — all within a budget of less than $145.  Adult assistance is prohibited and the team really takes pride in completing the work without outside help.

While making the competition is a great honor, it also will be an expensive one. The team will need about $9,200 to attend the World Finals.

“This team has literally spent hundreds of hours of their own free-time preparing their solution,” said team coaches Bethanne Downhower and Kavita Nanda.  “This talented group will do a great job representing Morrisville/Cary in the world competition, but we need community support to get there. We are hoping local businesses, civic organizations and individuals can help us defray the expense of the World Finals competition.”

Anyone interested in supporting the team can e-mail the teams coaches at: