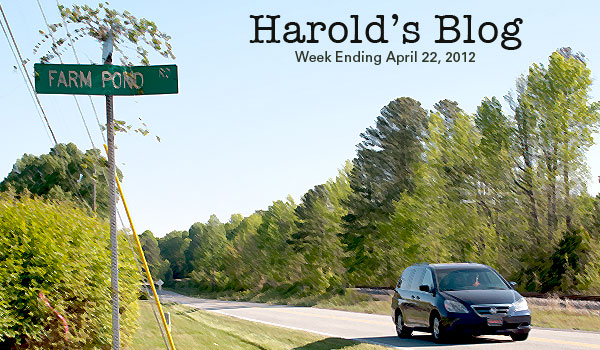 From the blog of Cary Mayor Harold Weinbrecht, covering the week through April 22, 2012. Photo by Hal Goodtree.

Cary, NC – This week was another busy week as is typical with a council meeting week.

Monday I called all council members to see if they had any concerns, issues, or questions staff should be aware of for the Thursday meeting. I was able to contact all council members by phone except one. The issues that generated the most questions were the St. Michael’s gymnasium traffic waiver request and the proposed chicken ordinance.

Later on Monday I joined Mayor Pro-Tem Adcock and met with managers, directors, and administrators to go over the agenda. The purpose of this meeting is to review the entire agenda to ensure we have all information needed to be prepared for the meeting. This includes who does what in the recognitions and presentations portion of the meeting. Most of our agenda discussion was on the St. Michael’s issue and the Chicken issue. In addition, the attorney said there would be a closed session to discuss a few items. Based on the long agenda, the discussion items, and the closed session, my guess for meeting adjournment was 11 PM.

Monday night I attended the Mayors Association meeting held in Cary. All mayors were present except the Mayor of Apex.

The meeting opened with a presentation by President Dr. Townsley of the newly branded William Peace University. She explained several issues including several changes to the curriculum and the change from a women only institution to coed. One interesting note from her presentation was that 98% of women will not consider an all-girls school.

After the presentation the mayors went into their regular agenda which included several items for discussion. It is important to understand that the Mayors Association does not take action as a group unless there is unanimous agreement. As a result of our discussion we decided that it is best that municipalities request a transit bond referendum rather than the Mayors Association.

Our meeting ended shortly before 9 PM.

Tuesday was a long busy day for me. After a long day at work with intense meetings I headed over to town hall to meet with the town manager. We talked about an upcoming economic development opportunity in downtown that would include HUD money. We also talked about technology and the future of technology in the town.

Later Tuesday the council and I participated in four work sessions. The first work session was to get an update from staff and consultants on the Public Art Master Plan. At the conclusion of this work session the council gave the following direction:

The second work session was a downtown update. There was a lot of good information presented at this work session. Here are some items of interest:

The council set goals for downtown development which include:

The downtown manager and council then discussed the operating assumptions. Basically, the town will create pods that the town controls and owns. The town will then invite development with very strict guidelines.

The third work session was on a Business Improvement District in downtown. The district is shown as item 6 in the document at http://www.townofcary.org/Assets/Staff+Reports/AD12-016+Downtown+BID+Draft+Report.pdf. The goal of this district is to incentivize development activity in the core of downtown to happen quickly through the payment of impact fees by the Town. These fees will be paid by the town from July 1, 2012 through June 30, 2015. Funding for these fee payments is estimated to be roughly $300,000 and come from the General Fund balance. Council agreed to move forward with this idea. A call for a public hearing will be held on May 10th and the public hearing will be on June 14th. Council could vote on this at its last meeting in June.

Our last work session of the evening was to establish the vacancy process for Ms. Robison’s pending resignation. Applicants will be required to submit a Statement of Interest and Qualifications that include:

It should also be noted that there are disqualifying factors that include sex offenses, all felonies, and several misdemeanors. Applications will be accepted starting at noon on June 1st and go through noon of June 29th. Council will hold a work session on July 3rd to decide what applicants to interview. Then council members will interview until the 23rd of July. The council will then hold another work session on July 31st to discuss the applicants.

Wednesday afternoon I attended the monthly meeting of the Capital Area Metropolitan Planning Organization (CAMPO). This includes elected representatives from Franklin, Granville, Harnett, Johnston and Wake Counties with a purpose of planning transportation improvements in the region. On this particular agenda there were no critical items that impacted Cary. The meeting consisted mostly of a presentation by CAMPO staff on the Long Range Transportation Plan. As you might expect, they predict funding to be an issue.

The group had a discussion on the transit plan that was previously presented to Cary and other municipalities. It is important to know that a plan approval will require approval of the Triangle Transit Board, CAMPO, and the Wake County commissioners. The discussion included whether or not to put a referendum on this November’s ballot. If it is not on this November’s ballot it will have to wait until the next general election which is the municipal elections next fall. The county commissioners have stated, and Commissioner Bryan confirmed that they want an Interlocal Agreement (ILA) from each municipality. My guess is that the majority of the commissioners do not want the people to vote on transit this fall. I hope that is not the case since Presidential Elections draw the most voters.

Later Wednesday I had the honor of attending the graduation of the latest School of Government class. I was joined by council members Bush and Smith. The class met for eight sessions that included visits to the firing range and a sewer plant. I had the pleasure of handing the graduates their certificates and shaking their hands. I also had pictures made with a few. All seemed to thoroughly enjoy being in the class and a few promised to be more engaged in the town.

Thursday’s council meeting lasted until after 10 PM. The discussion on chickens took most of the discussion time. I voted not to move forward with an ordinance and have been asked why several times. Here is the response I have been giving:

“While I applaud those that want to create a healthier lifestyle for themselves I do not believe an urban/suburban area, especially one that is known for its beautiful neighborhoods like Cary, is the place for chickens.”

My main concern is that someone, who spent their life savings on a house, a dream, and a lifestyle, will now have no voice in what their neighbor does that dramatically impacts their lifestyle. That is, someone may be forced to live next to livestock in Cary. That is why the current law only allows chickens on one acre lots.

I fear that homes with chicken coups will devalue adjacent properties.

I also fear that the town will now be spending extra money to enforce an ordinance that, I honestly believe, is not what the majority of Cary citizens want.

It is my hope that all my fears and concerns are an overreaction on my part and that everyone DOES want chickens in and around their homes. I know I am NOT one of those people.

The only other contentious topic that created discussion was the traffic waiver requested by St. Michael’s church. The council unanimously agreed to approve this waiver even though there was much concern about the need for a traffic light at the entrance of Bond Park.

Friday I had dinner with friends and instructors from a school in Le Touquet, France that are here with culinary students as part of an exchange program with Wake Tech. We have known each other for about ten years since we hosted one of the exchange students in 2002. It was a great time and I feel blessed to have such good friends.

Emails this week included a special one from the White House cordially inviting me to be a VIP guest at President Obama’s speech at UNC Chapel Hill on Tuesday, April 24th. Unfortunately, I will be out of the country and so I had to decline. They offered to invite me to future events.

Emails this week consisted mostly of the chicken special interest group. I also received several emails asking that Cary to put the transit plan to a vote this fall. Of course that is a county decision and not a Cary decision. I personally support the draft of the transit plan. I also received several other emails that included speeding in a cul-de-sac and a complaint about a dog bite.

Next week my wife and I will travel out of the country to celebrate our 25th wedding anniversary. (Note to thieves: someone is house sitting) So my mayoral calendar is clear.

Well that is all for this week. My next post will be on Sunday, April 29th. Please feel free to email me with a comment. Email all Town of Cary questions or comments to Harold.Weinbrecht@townofcary.org. Email personal comments to augustanat@mindspring.com.