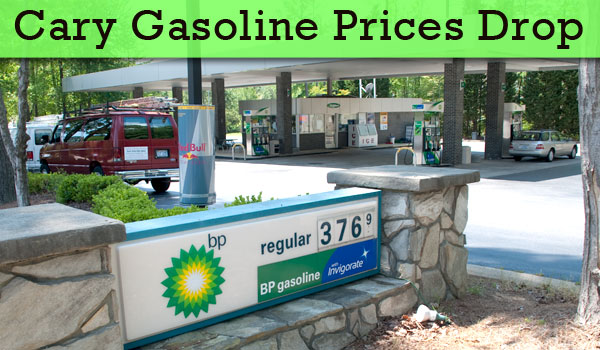 Cary, NC – During the late winter and early spirng, gas prices surged in Cary and around the U.S. But in the last month, gas prices have reversed course, driving down about $0.20 per gallon of regular.

The Crude Truth About Gas Prices

Gasoline prices are broadly driven by the price of crude oil.

Tensions with Iran plus surging demand from China and elsewhere are widely believed to have been primary drivers of the spike in prices.

But worldwide demand is slowing, consumers have reacted to high prices by driving less, and more production has come online from Saudi Arabia and Libya. Last week, the largest refinery on the East Coast announced a planned closure will be delayed, easing market fears.

Gasoline Down 20 cents in Cary

Last week, a gallon of regular was widely available for around $3.76.

Around the Triangle, a gallon of gas could be had for as low as $3.52.

The Future of Gas Prices

Expect gas prices to continue to gently taper off for a few more weeks, then rise again around Memorial Day.

Be thankful you don’t have to buy gas in The Netherlands, where the price of gallon the equivalent of $6.48.

Venezuela has the cheapest gas in the world at about $.12 per gallon. They also have Hugo Chavez.

Theater: Cary Player’s Production of The Rainmaker
Scroll to top