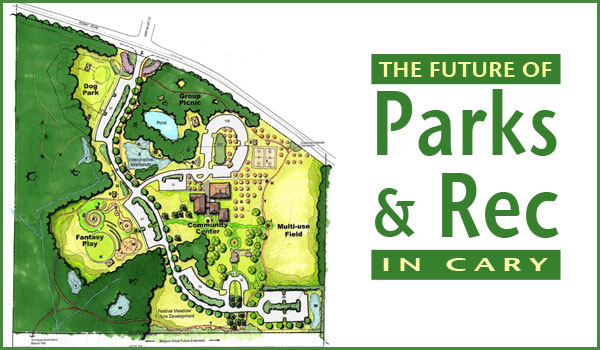 Story by Lindsey Chester. Ms. Chester is a member of the Town’s Parks & Rec advisory board and Associate Publisher of this news source.

Visitors listened to the sequence of events that led to the new plan that included surveys of residents, feedback at other similar meetings and town council work sessions. The Town hired GreenPlay, of Broomfield, Colorado, to spearhead the Plan and then present it to residents, staff and ultimately Town Council for adoption in October.

The last such plan was created over 10 years ago, and with increased population and a four year recession, priorities have shifted and some projects have been put on hold.

The new master plan will be a twenty year roadmap for recreation and cultural resource needs. CaryCitizen reported earlier about some of GreenPlay’s early findings (see Parks story). The team is now in the final phase of planning and showed slides and maps for resident review in the town hall lobby.

Main themes that GreenPLay found were increased need for Greenways, Downtown focus and Parks. Other ideas that had come up in the survey were a focus on a high level of service, preservation of natural resources and sustainable design. Needs not currently being met included Fitness equipment and aquatics.

What Do the Consultants Recommend?

Of these, only five require additional land purchases. The Town had previously land banked acreage (especially in the West) for future park building. Some parks are already funded with grants and partnerships, these include Carpenter Park in the West and the New Hope Road Trailhead Park near the American Tobacco Trail. Bartley Park in the South  will come before voters in the 2012 Bond Referendum and will soon go out for bid. Other areas to be considered for moving forward: Cameron Park, Mills Park Expansion and Morris Branch. The Historic areas include The AM Howard Farm Park and CF Ferrell Store Park.

Folks complain that many greenways have been built but don’t connect to each other or to areas they wish to walk to. The Town will make connecting these a priority especially in the West where developers have already built parts of trails through the Land Dedication ordinance. The goal is to create a 200 mile system of greenway trails, of which there are currently 62 built miles. The Town also needs to step up signage and awareness programs for the trails and perhaps even create some programming.

Residents spoke loud and clear that they wanted more festivals, fitness and wellness programs and more youth activities. Another major issue was inclusiveness and need for access for residents with disabilities. Many wanted swimming programs. To address these issues the Town may need to partner with some existing organizations to provide service.

How to Provide All of This?

The trend nationally and what was found in the surveys was to move towards larger more multipurpose centers (Think Lifetime Fitness or the Cary Y). The thought being that these one stop shops have something for everyone in a family and encourage retention of members. The result will be less specialty facilities, so no second Senior Center is planned.

Currently the Town has three main community centers: Bond Park, Herb Young and Middle Creek. For the future three more will be added. One in the south to be called Bartley Park, in the west at Mills Park and another as yet unnamed center somewhere centrally located. (And remember the geographic center of Cary is now Bond Lake.)

Existing facilities need to be maintained and there are needs for expansion at some. Currently Hemlock Bluffs has only one classroom, but could expand to teach more programs if there were more space. Herb Young could use more gym space. Bond Park could add other meeting rooms, and has land to grow, to possibly fill some of the multipurpose needs residents want.

If the Town can plan for even half of these things for the next twenty years, Cary will continue to be one of the best places to live and raise a family. Who wouldn’t want all this?

How to Pay For?

Some of these needs will come before voters in a bond referendum to raise funds this fall. Some items will be paid for with grants that town staff continually applies for (and receives much park funding). Greenways are something that even in these tough times the town has managed to fund through grants and partnerships with housing developers.

One shocking finding in the GreenPlay survey was that of the folks that responded (over 2000 residents did so):

All these parks, greenways and recreational programs and these residents didn’t know they existed. Staff will be tasked with figuring out how to reach residents in the 21st century digital age.

If you use parks, greenways, Rec programs or attend cultural events, please tell us how you find out about them by taking this short CaryCitizen survey (6 questions). All answers are completely anonymous and confidential.

If you don’t see the survey here, you can also take it online.

Letters: Paul Stam on Amendment One