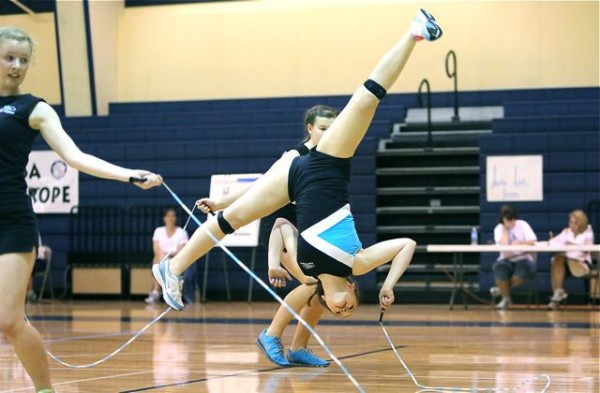 Cary,NC – The Cary YMCA SuperSkippers continue to dominate the competitions wherever they appear. Most recently their talents earned 11 teammates places on Team USA to compete in Florida and beyond.

USA Jump Rope sanctions a series of tournaments across the United States which culminate in the national tournament held annually in Long Beach, California.  Competition starts at the state or regional level, with top finishers advancing through to the next competition level.  Events are held in a variety of age divisions, speed, freestyle, and team competitions.  Both individual jump ropes and double dutch ropes are used.

Representing the USA at the Worlds

The SuperSkippers team is preparing for a busy summer that includes travel to Long Beach, CA for the U.S. National Jump Rope Championship in June, a trip to Washington, D.C., for the World Jump Rope competition in July, and finally, the FISAC-IRSF World Championships in Tampa, FL, in August.

A select group of team members qualified for the FISAC-IRSF World Championships to be held in Florida (see list below) this summer by competing in February at the FISAC U.S. Trials Competition Team USA Qualifier in Brighton, MI.  The competition will take place July 31st through August 9th this year on the campus of the University of South Florida. This international event will have teams represented from 21 countries this year.

The following kids from the Cary Y Super Skippers have made Team USA for the 2012 FISAC-IRSF World Championships in Tampa, Florida.

Another area team, TriForce Jump Rope in Morrisville, will also be sending athletes to the Team USA competition:

Jump Rope Growing as a Sport

Jump rope continues to grow as a sport, with many pushing for Olympic sanctioning. The sport combines agility, stamina, speed and in many cases tumbling. Athletes compete as teams of 2- 4, and individually.

In our area 4 gyms have competitive teams: The Cary Y, Tri Force and the Bouncing Bulldogs & Skipsations  both of Chapel Hill.

The beauty of the sport, unlike many traditional team sports, is that a person only needs a jump rope and a good set of sneakers and can practice anywhere, be that a gym, a driveway or a garage.