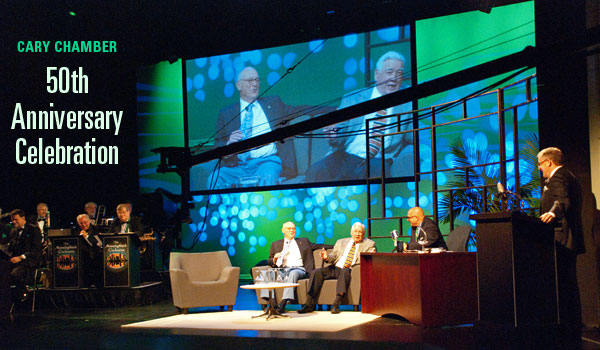 Cary, NC – “How was it?” Lindsey asked. I had just gotten home from the Cary Chamber 50th Anniversary Celebration. “Lots of fun” I answered. “Unexpectedly moving.”

The Tonight Show with Steve and Howard

Tuesday May 22, 2012 was the 50th Anniversary Celebration of the Cary Chamber of Commerce.

After some stellar appetizers and a couple of glasses of Merlot at Cary Arts Center, the crowd filed into the theater.

Steve brought his madcap style to the top banana role. And Howard did a fine job as the sideman.

All-Star Line Up of Guests

Of course, any talk show is about the guests. Johnny and Ed Howard and Steve got some great guests for their retrospective of the Cary Chamber.

Jerry Miller and Dick Ladd talked about the early days of the Chamber and Jerry explained a little about starting the first Lazy Daze festival. The sequence ended with a rapid-fire montage of dozens and dozens of Jerry Miller’s drawings around and about Cary. 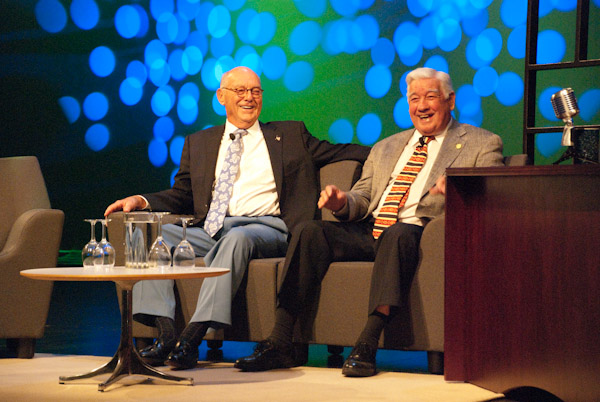 The band played and former Mayor Koka Booth came out and waved to the crowd.

Then Howard recognized former chairmen (and chairwomen) of the Chamber – almost two dozen people stood up in the audience. It was a pretty impressive display of Cary’s tradition of leadership.

The next guest was John Sall, a co-founder of SAS.

Dr. Sall talked about the early days at SAS and how they picked Cary based on a statistical analysis of where all the employees lived. The center point was Cary. “But we got it all wrong,” Sall quipped. “Cary was a place to live, not a place where people worked.”

After John Sall, Colonel Hal Shook came out to chat with Steve and Howard.

Steve asked Colonel Shook to describe flying over Normandy Beach as a fighter pilot on June 6, 1945. “Low clouds,” Shook said, “but then they parted. I could see about 7,000 ships, all near the beach. The guns from the battleships were all firing at once, it looked like a line of fire on the water.” 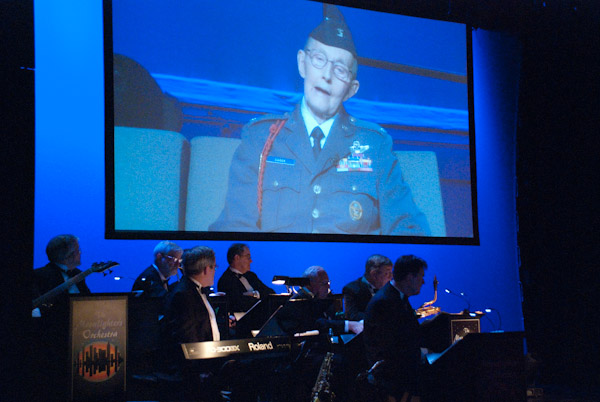 The Steve and Howard show resumed with a humorous video in which Cary Mayor Harold Weinbrecht tries to beg off the event in favor of a little tennis.

Then the Mayor came out (tennis racket in hand) and read a proclamation from the Town Council congratulating the Chamber on 50 years of success.

The last guests of the evening were the Ashworths – Ralph, Gary and Paul.

Steve started by talking to Ralph. “My first job was behind the counter at Ashworth’s,” Steve said. “You paid me two bucks an hour.”

“I think I paid too much,” Ralph said. 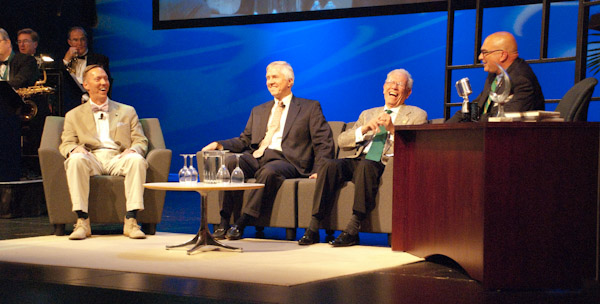 Gary talked about playing in the Town band, and Steve picked on him for his cluttered office. Paul talked about his love of bow ties and how grateful he is to work in the business started by his mother and father. Ralph, Gary and Paul all did their time as chairmen of the Chamber.

“Looking back on fifty years of Chamber history,” Steve asked Ralph, “what’s your advice for the future?”

The Ashworths left the stage to a huge round of applause. Howard and Steve traded banter for a moment, but were interrupted when Cary Police Chief Pat Bazemore burst into the theater. Without so much as a howdy-do, she cuffed Zaytoun and led him off stage. Howard smoothly slid into Steve’s chair. He looked good as top banana. 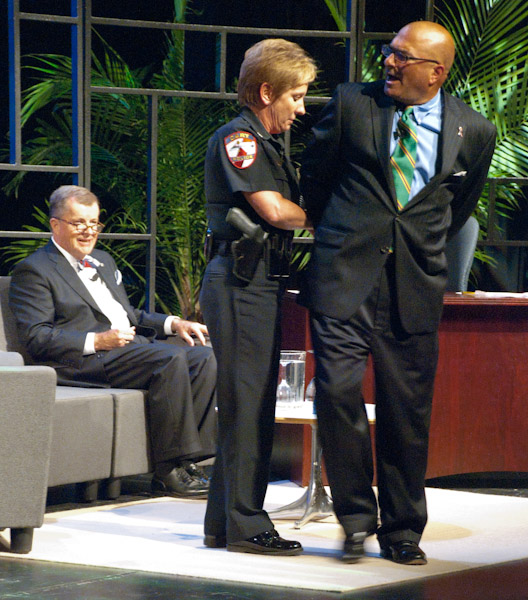 The house lights came up and we wandered out into the night. The next 50 years in the history of the Chamber had begun.

The show made me proud of my Chamber membership, brief though it has been. I found out it’s more than just an organization. It’s an idea. 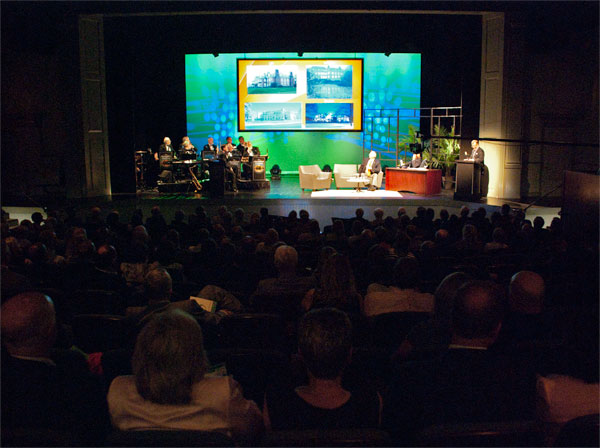 RailHawks: Next Up David Beckham