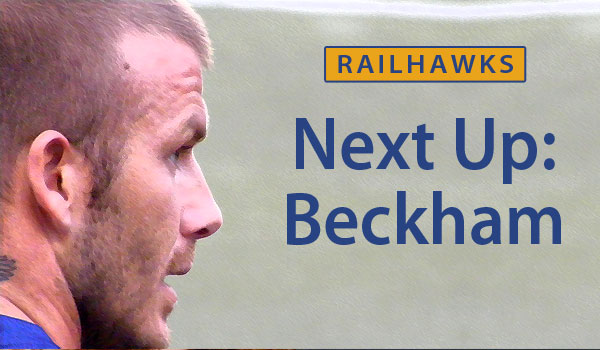 Cary, NC – With a first half 5-goal onslaught by the Railhawks, the WakeMed Park crowd saw the Cary-based team finding the back of the net a total of 6 times in Tuesday nights’ US Open Match. Next up: David Beckham and the L.A. Galaxy.

For the first 45 minutes, the ‘Hawks were seemingly banging them home at will on Tuesday night.

It was a nice release for the team and the home crowd – finally seeing some welcomed scoring.

They went on to beat the PSA Elite (Irvine,California) team, who went scoreless in this match.

The PSA Elite is an amateur Association Club with a mixture of prospects and experienced players. Notably both Mikey Lopez and Jordan Gafa, who were members of the 2011 National Champion UNC Men’s Soccer team, play for PSA Elite.

First Half – Hats Off to Shriver

The first 45 minutes had Shriver finding the goal 3 times for a hat trick. The RailHawks had outshot their opponent 14-5 in the period.

Brian Shriver had a great near miss shot after a pass from Zimmerman in the 4th minute. After that he was magic.

In the 7th minute, Shriver scored on an unselfish assist from Cary native Zack Schilawski on a breakaway. Midfielder Austin Da Luz set the play up.

In the 9th, Lowery scored off of a corner kick.

In the 23nd, it was Da Luz to Shriver, who opted not to pass to Breiner Ortiz staring at an open net on the left.

At 40:12, Schilawski scored on an assist from Ortiz. Fullback Cory Elenio set the play up.

There were several missed opportunities by the Railhawks, believe it or not.

The second half saw the RailHawks control the ball with short passes in triangle formations.

Shriver scored his fourth of the night after a shot was temporarily stopped by PSA Elite Goalkeeper Trevor Widdon.

Next Up: LA Galaxy and David Beckham

The ‘Hawks will face the the L.A. Galaxy from the Western Conference in the next round at WakeMed Soccer Park on Tuesday, May 29. Tickets are still available.

The Galaxy has a line-up of big names: Landon Donovan, Robbie Keane, and David Beckham.

RailHawks great deal – for $33 you will be guaranteed a Premium seat to see the L.A. Galaxy and two more RailHawks games including the July 3 Fireworks Extravaganza and the Regular Season Finale. You can order tickets by calling the Cruizers Box Office at (919) 459-8144.

Coverage on CaryCitizen is sponsored in part by Garden Supply Company on Old Apex Road in Cary.