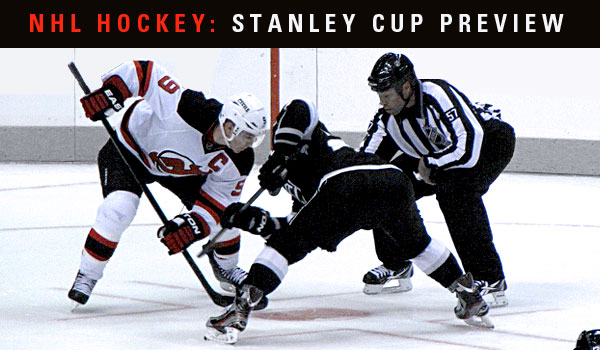 Cary-lina, NC –  Who wouldda thunk the eighth seeded L.A. Kings would be playing the sixth seeded N.J.Devils for the Stanley Cup  – except for the fans of each team?  So much for my prediction for a St. Louis Blues- N.Y. Rangers final.

The Devils hit their stride perfectly at the end of the season.  They won their last 6 games and entered the playoffs feeling very confident.   The most difficult series they had was in the first round against Florida which went all 7 games.   The Devils won the all important first game on the road. Then they traded wins the entire series.

The seventh game was outstanding going into double overtime when Adam Henrique scored on a power play on an assist from Alexei Ponikarvosky.  Ponikarvosky was traded during the season to the Devils from our very own Carolina Hurricanes.  He fit better with the Devils more so than he did with the Canes.  He’s a big forward and some called him “soft” when he was with the Canes.  He fits the mold of what type of forward the Canes need to play along side Eric Staal or Jeff Skinner: someone big, fairly well-skilled. But he fell short of being  “a banger” like Tuomo Ruutu.

The Devils went on to easily beat the Flyers, 4-1, then had a great series against the Rangers.  They spent a bunch of money on getting Ilya Kovalchuk who was a bust very early in the season but made up for lost time.

The Kings barely made the playoffs then blew by everyone on  their way to the finals.  They beat the President’s Trophy (award for highest scoring team) Vancouver Canucks, 4-1. Then they blew by the Blues, 4-0, and hardly drew a sweat against the Phoenix Coyotes 4-1 for an amazing 12-2 playoff record.

Former Cane Justin Williams is playing very well and is third on the Kings in scoring for the playoffs.   The Kings have 2 players that were on the 2006 Oilers that lost to the Canes in the Cup finals, Jarret Stoll and Matt Greene.  Interestingly, that was also a #8 seed team and they’re both hoping history does not repeat itself with the #8 team losing in the finals.

Who Wants It More?

If anything, this series will be, as coaches always say, about the one that wants it more.

As good as Martin Brodeur is, Jonathan Quick is better.  Goalies are so important in playoffs (as our Canes saw in 2006 with Cam Ward) and even with the Devils wanting this for Brodeur, I see Quick having the upper hand.

The Kings defense is better but the Devils offense is better, all pointing to a very interesting series.   Finals usually have low scoring games and I would expect the same here.  If conventional wisdom worked all the time, neither team would be in the finals, so really anything goes.

The Kings have had a surprising blessing with minor league call-up Dwight King scoring 5 playoff goals.

Cane-killer Patrik Elias hasn’t had his scoring touch yet for the Devils in the playoffs so expect him to break out of that slump.

Parise a Cane One Day?

Canes General Manager Jim Rutherford said right after the season ended that he had his eye on a player like Zach Parise to play along side Staal. That alone was one of the reasons I was hoping the Devils would get bounced early in the playoffs.  You can’t talk to players or agents until a player is no longer playing.  Parise is having a great playoff and if the Devils win, could be among the players under consideration for the Conn Smythe (league MVP in the playoffs).   I’m rooting  for Jonathan Quick to win that award.

The Canes aren’t the only ones interested in Parise, nearly every team has him on their list.  Going deep in the playoffs only sets that salary higher.  With the strong rumor that the salary cap will be lower next year,  it presents interesting positions for several teams at, or near, the current cap.  Pittsburg is near the cap and with a few free agents this year and some high-priced players that have 1 year left on current contracts.

Jordan Staal could be on the trading block and the Canes would have to be interested in a player with his skills.  At $4.5 million, I can easily see trading a current Canes player at just under $2 million plus a minor leaguer.  Jordan Staal scored 25 goals in just 62 games.

There are other players available but this offseason will be a sellers’ (players’) market.  All good stuff to keep the internet trade rumors going for the next 3 months.

The Carolina Hurricanes will be making some moves this summer.  Personally I’d like to see a strong forward or two and a strong defenseman.   They have 2 very good prospects at defense and I can see bringing one or both up and trading an existing player or two for future draft choices.

Hopefully JR will make the right moves.  He’s a magician when it comes to signings and moving players that need to be moved.  This year, he has to pull off a David Copperfield – big time.

I’m Rooting for the Kings

It would be nice to have the Cup with an Eastern team but, uh I mean –  it’s The Devils.

I have great respect for several Devil players, respect what they’ve accomplished this year getting to the finals but the behavior of some of the Devils fans on our ice have me pulling for the Kings in what I hope is a 7 game series.

First game is Wednesday, the 30th of May.