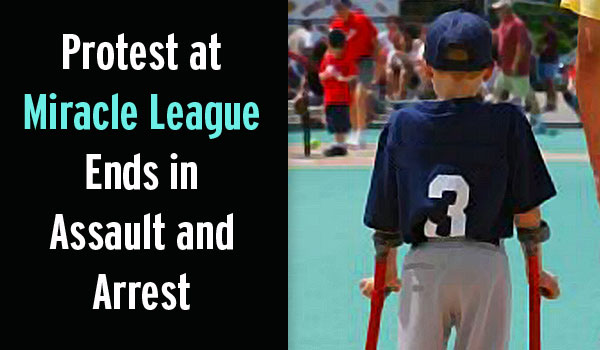 Cary, NC – A protest at a Miracle League of the Triangle event last weekend ended in an alleged assault and the arrest of a Raleigh man.

The Miracle League of the Triangle is a non-profit dedicated to serving kids with special needs through baseball. According to their website, the league has over 200 participants and 22 teams with 500 volunteers. CaryCitizen has written about Miracle League in the past.

On Saturday, about a dozen protestors showed up at Adams Elementary where the Miracle League currently plays their games.

Miracle League, with the Kerr Family YMCA, is in the planning stages for a second special-needs baseball field near the Carrington neighborhood of Wakefield Plantation off Falls of the Neuse Road in Raleigh.

The protestors handed out flyers to the parents of Miracle League participants, objecting to the plans for the new ball field in their neighborhood.

CaryCitizen obtained a copy of the flyer, which leads with the line “What the Miracle League is Not Telling Parents.” Many parents who received the flyer were upset with its content and tone, a seeming warning about health concerns related to the proposed site. The subtext of the message was that the Miracle League was deceiving parents and exposing children to a health risk.

One parent characterized the flyer as “scare tactics” and was “not happy” at the protest at the site of a Miracle League event.

According to another eye-witness, some parents felt “threatened and harassed.” The protesters began videotaping the scene, asking parents “do you care about your children?”

For parents of special-needs children, this is a particularly offensive tactic.

First Visit from the Police

Some heated words were exchanged and the Cary Police arrived before lunch.

They informed the protestors that the Miracle League had a right to determine who was on the property at Adams Elementary during their games. The police had the protestors remove their cars from the school parking lot and take their protest off school property.

Around 3 PM,  a man and his son began protesting on the drive up to the school.

Miracle League parents, well-aware of the incidents in the morning, became agitated with the man’s presence on school property.

Traci Brown, Executive Director of the Miracle League, spoke to the man in the driveway, informing him that the police had instructed protestors to stay off school property.

According to first hand reports, what followed was a “physical assault.” The man was then alleged to have fled the scene.

Cary police were once again called. A warrant for the man was issued on Saturday, according to Cary Police Captain Michael Williams.

More About the Protesters

The protest took shape on the web about two weeks earlier with an online petition directed against the Miracle League and the YMCA.

This first petition focused on the “destruction of peace and serenity in Carrington.” As of Friday, June 1, this petition has garnered 3 supporters plus petition creator Crystal Rhoades of Raleigh.

A second petition emerged shortly thereafter, but this one focused on the alleged health risk to children, not the “peace and serenity” issue. The second petition was started by a group calling itself Carrington at Wakefield Plantation.

Back on April 28 and May 1, the Kerr Y held two community outreach meetings about the proposed ball field. The land had been given to the Y by Wakefield Development and is zoned for the proposed use.

Personnel from the Y and Miracle League expected the meetings to be cordial. Instead, eyewitnesses described the outreach sessions as “bizarre,” “hostile” and “shocking.”

According to a source with knowledge of legislative affairs, “if that zoning allows outdoor recreation, and meets all other Raleigh ordinances, I would suggest to the concerned homeowners that they have few options to affect the outcome.  I would also let them know that without legislative options, ie, appealing to the Raleigh city council to deny a rezoning request, that they should take a very different approach.” Any accommodations would be “goodwill measures and not ordinance requirements.”

Stacie Craft, Associate Branch Manager for the Kerr Family Y, said plans continue for Phase I development of the Wakefield tract as a second ball field for the Miracle League. Looking ahead, Phase II development options might include a special needs playground or practice field.

In an official statement, Miracle League had this to say:

“We at the Miracle League of the Triangle were shocked and appalled by the incidents at our ball field on Saturday, May 26.  Our plans to build a second field in North Raleigh have been welcomed with great enthusiasm among parents, volunteers, and—most of all—the children on our waiting lists who just want a chance to play ball.  While we may never understand why a few North Raleigh residents decided to stage a protest at our Cary ball field, upsetting and harassing families on what was supposed to be a celebratory game day, we hope that they will work with us and the entire special needs community as we move forward.”