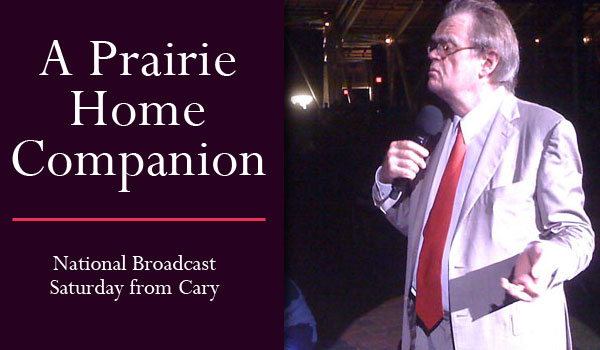 Cary, NC – How many of you listen to A Prairie Home Companion on the radio? Show of hands. Well, this Saturday, Garrison Keillor and Company will be broadcasting their national radio show on NPR live from Booth Amphitheatre in Cary, North Carolina.

Just this week, we’ve had the L.A. Galaxy in town (lost to the RailHawks) and now a national broadcast of A Prairie Home Companion.

Maybe Cary should be the Media Town instead of Tech Town. Okay, maybe both.

Just the facts: A Prairie Home Companion (APHC) will bring their show to Booth Amphitheatre in Cary on Saturday, June 2, 2012. Tickets are still available.

Not familiar with A Prairie Home Companion? It’s like an old-fashioned radio show about the mythical small town of Lake Wobegon, Minnesota, “where the women are strong, the men are good looking and all the children are above average.”

A Prairie Home Companion had its first performance in 1974 and has been delighting audiences ever since.

As Promised by Garrison Keillor

When last APHC was in town, Keillor suggested that it might be nice to do a broadcast from Booth Ampthitheatre in Cary.

Maybe it’s the swans on Regency Lake. Maybe it’s the hotdogs at Ashworth’s. But Garrison Keillor was true to his word and this week’s national show will be broadcast from our own fair metropolis.

Events coverage on CaryCitizen is sponsored in part by Garden Supply Company on Old Apex Road in Cary.