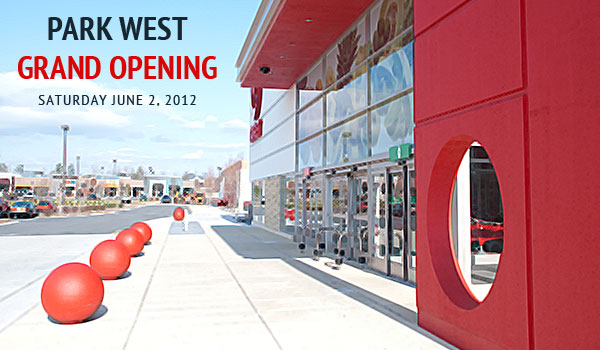 Morrisville, NC- Stores have been open since October 2011, but now the Park West Village shopping center has reached critical mass and is ready for their Grand Opening bash this Saturday, June 2.

Located at the busy intersection of Cary Parkway and Chapel Hill Road, Park West’s stores have been opening in phases these past 6 months beginning with the anchor Target in October 2011. The Big Box phase opened first along Cary Parkway and restaurants and smaller retailers have been opening quickly in the Chapel Hill Rd side, known as the “Village”.

Festivities for the Grand Opening are planned to start around 4pm and finish up with a fireworks display which starts at 8:30pm. Free food, drinks and fun is promised for the whole family.

Visitors can win shopping sprees, an iPhone, restaurant gift cards and more according to Sarah Benson, Director of Marketing for Casto, the management company for the Park West property. There’s even a Pet Costume contest which will start at 5pm.

Plenty of music on deck with a DJ and several bands that include locals Sandbox Band, Garth Robertson and Gentle Giants.

According to Sarah Benson of Casto, “We will have four zones set up, two in the parking lot (one near GNC & one out in front of Ross b/c they aren’t open yet) and the rest of the vendors, tents and entertainment will be set up on the sidewalks and in front of the stores. The restaurants are fully operational and open for business. Some of them will be walking around handing out food & some will just be set up in front of their restaurant.”

Recent additions since we last wrote (Mar 20, 2012) about Park West include:

The walls of the movie theater have started to rise and Sarah told me that they are hoping to have the Stone Theater up before the holidays. Rumors have abounded about an IMAX, but I am told it is similar quality, but IMAX is a trademark, and this is not one of them. A restaurant and water feature will help this new addition stand out in the Triangle movie landscape. The screens will be large like an IMAX, meaning both wider and taller, with surround-sound better accoustics.

Gander Mountain, which has begun construction on the far side near the Morrisville entrance, should also open before the holidays. This store sells outdoor provisioning like camping, hunting and fishing gear and will be the only store in the chain in the Triangle area.

Business News on CaryCitizen is sponsored in part by Citizen Websites, digital marketing for leading businesses across the Triangle.