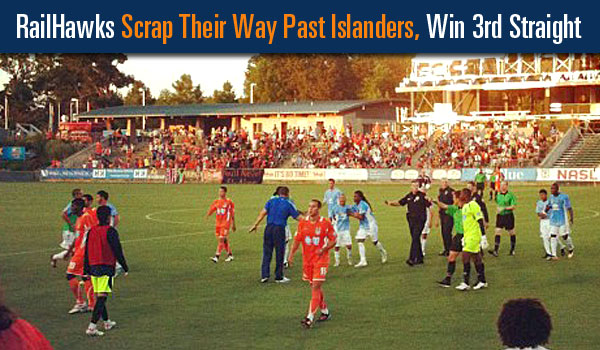 Cary, NC – In the most entertaining game of the year, the Carolina RailHawks beat first-place Puerto Rico 2-1 on Saturday night. This game had shoving matches, injuries, flying bodies, police escorts of players, an ejection and several yellow cards issued. Most importantly, it had a timely goal near the end of regulation by the inspired Hawks to win the game.

As we mentioned in CaryCitizen less than two weeks ago, these two teams are more closely matched than their records show.

Puerto Rico decided to rely on the long ball in the first half hoping to catch tiny forward Jonathan Faña in a breakaway. It almost worked in the 13th minute, with the pesky Faña streaking up the middle but missing the goal wide left.

The RailHawks, in contrast, played a short ground game.

The edge was to the Islanders in the first 20 minutes, but the later minutes of the first half had the RailHawks putting some nice pressure on goalie Richard Martin.

In what seemed to be a turning point in the game, star defender Gale Agbossoumonde was given a red card for two spikes into Faña’s legs. Agbossoumonde was brought to the Hawks via Estoril Praia of Portugal for the 2012 season.

The RailHawks were to play short a man from the 37th minute on as a result. The fans and the RailHawks were fired up believing that Faña over-reacted to the foul, laying on the field for quite some time.

In fact Faña did return to the game in the 45th minute amid cat calls and boos. Then words were exchanged, and the two teams found themselves in a shoving match with one another.

At the end of the period, a few Cary Police escorted the two teams off the field. Faña could not control himself and was jawing with RailHawks players while being held back by his own team mates all the way to the tunnel.

The second half saw more of the same chippy play. Extra effort was being made to contain Jonathan Faña, to the fans’ delight.

In addition, forward Zack Schilawksi had taken a beating in the first period and the second period was more of the same. The Cary native saw himself laying on the turf several times in the first half.

In the 51st minute, in the second period, number 22 again got decked just outside the box and the resulting kick was fruitless for the Hawks.

About a minute later the same thing happened to Schilawski and the RailHawks had another free kick from virtually the same spot. This time midfielder Austin DeLuz  flipped the ball toward the net and it went off of Puerto Rico defender Rivera and into the goal. 1-0 Hawks.

Soon after, the Islanders knotted up the game. Forward Jonathan Faña sent the ball to a wide open Jay Needham to tie the game. 1-1.

The RailHawks got their second wind and began to put pressure once more on the backpedaling Islanders.

In the 67th minute Carolina’s Cory Elenio hit the crossbar in what looked like a sure goal until the fans and players heard the loud ping of metal. And Zack Schilawski was continuing to play inspired ball. It seemed like this game could end differently than the last time these two teams faced each other.

In the 88th minute, Ty Shipalane, who had come in for Schilawski, put the ball over the keeper’s head and into the goal. The assist was given to goalkeeper Ray Bourse. 2-1 Hawks.

The ejected and now showered Agbossoumonde was watching the game near the press box quietly, and next to me. He reached out and we silently fist-bumped as the RailHawks scored their winner. He had indeed inspired the RailHawks to this shorthanded win. And he knew it.

The game ended in predictable fashion with Faña screaming at RailHawks players and being held back by his own team mates as the players headed to the locker room.

This is a rivalry in the making.

On Tuesday June 5, WakeMed Soccer Park and the RailHawks will host MLS’ Chivas USA in the Fourth Round of the 2012 U.S. Open Cup. Chivas USA won their Third Round game versus Ventura County Fusion of the PDL 1-0. Get tickets.