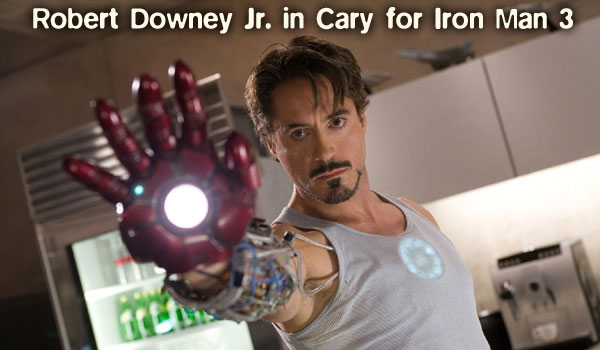 The production in Cary is taking place at Epic Games on Monday (today) and Tuesday. Fans have been lining up all day to catch a glimpse of the stars.

So far, the closest anyone has come to movie magic is watching some film “greensmen” doing a little landscaping.

Weather permitting, drivers should be on alert for police-controlled intermittent delays in Cary on Weston Parkway from NC 54/Chapel Hill Road to Harrison Avenue on June 6 from 10 a.m.-3 p.m. These periodic rolling closures are to accommodate activity registered with the North Carolina Division of Tourism, Film, and Sports Development.

Not sure if this relates to the filming, but it might be. High-profile movie productions are generally hush-hush about their exact plans.

In any event, be aware that movement around town might be somewhat affected by major movie production this week.

You can spend all day hanging around the parking lot to catch a glimpse of Iron Man.

Or, you can hunt up my favorite movie starring Robert Downey Jr. – Chaplin, 1992, directed by the magificent Richard Attenborough.

Attenborough (Ghandi, A Chorus Line) is a master, but Downey’s work in this film is masterful as well.

What I love about Downey in this movie is how deeply he emulates Charlie Chaplin, particularly in his physical preseence – how he moves, uses his hands and his face,. You really forget it’s Downey and think you’re watching Chaplin.

The movie is a great trip to old Hollywood, beautifully produced and marvelously acted.

Or, visit Caitboo Ave in Cary, NC on Tuesday and you might get a glimpse of Robert Downey, Jr in the flesh. Tell him you loved his work in Chaplin and I’ll bet you get an autograph.