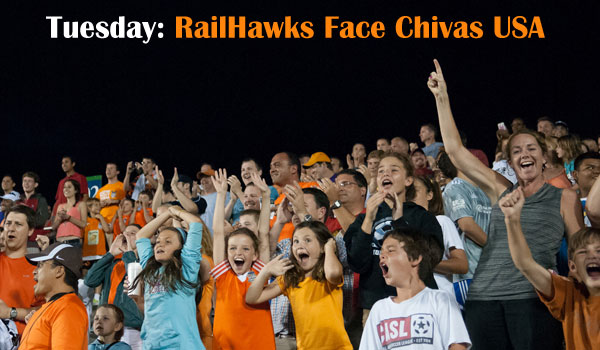 Cary, NC – What do you get when you beat MLS L.A. Galaxy? You get to face Chivas USA. Whether or not you are going, expect heavy traffic on East Chatham Street near Wake Med Soccer Park in Cary on Tuesday evening.

First one MLS team, now another. It’s a little like first the Yankees and then the Red Sox playing the Durham Bulls.

Why are these major league franchises trekking to Cary, North Carolina?

It’s the RailHawks, an upstart from the North American Soccer League (NASL) competing for one of the highest trophies in soccer, the Lamar Hunt Cup.

Last week, the Hawks knocked off the Galaxy (sans David Beckham) keeping the Cary team alive in the Cup.

So now it is Chivas USA‘s turn to visit the Piedmont. Chivas USA, based in Los Angeles, is in 6th place in the MLS Western Conference with a record of 4-3-6.

Last week’s match against the Galaxy sold out – more demand than tickets in fact. Almost 8,000 in attendance.

If you travel on East Chatham or Hillsborough Street near WakeMed Soccer Park, between 5-7 PM, be aware of possible traffic delays. If you’re not going to the game, consider taking an alternate route.

Just don’t go past Crossroads, because Robert Downey Jr. is over there filming Iron Man 3.

Visit RailHawks.com to get tickets to Tuesday’s match against Chivas USA.

Act fast because this one may sell out, too.