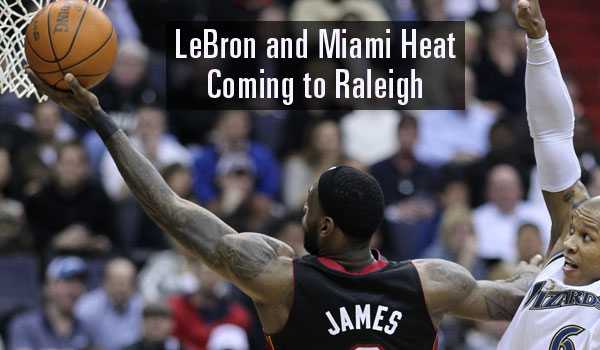 Cary, NC – Ever wanted to see an NBA game live? You’ll get your chance on October 23, 2012 when LeBron James, Dwayne Wade, Chris Bosh and the Miami Heat play the Charlotte Bobcats at PNC Arena in Raleigh.

Bringing His Talents to the Triangle

The Charlotte Bobcats will hold a special preseason game against the Miami Heat for Triangle basketball fans on October 23, 2012 at PNC (formerly RBC) arena.

LeBron James was the NBA regular season MVP this year, his third time honored. James is flanked by perennial All-Stars Chris Bosh and Dwayne Wade for one of the most daunting “Big-Threes” in the league.

Meanwhile, Back at the NBA

Not an NBA fan? We’ll catch you up.

The Heat is in the thick of the playoffs, facing the Boston Celtics.

The Bobcats on the other hand finished the season in the cellar with a dismal 7-59 record. No idea who’s coaching or who will be on the team next season.

But Michael Jordan, whom many may recall as a standout player at Chapel Hill a few years back, is still the Bobcats team Chairman. Maybe MJ will show up in Raleigh to cheer on his squad.

Sound of Music Sing-a-Long and Mozart at Page-Walker