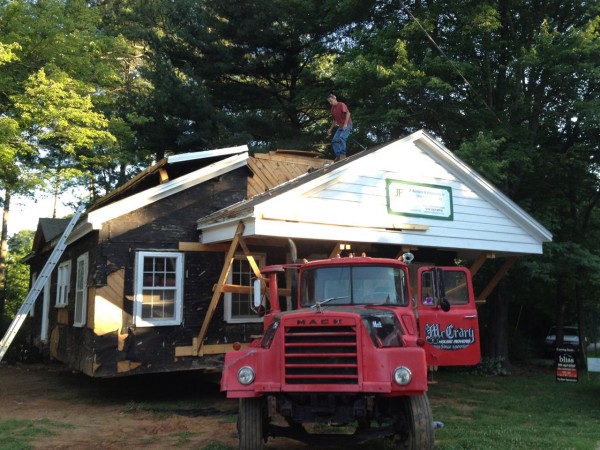 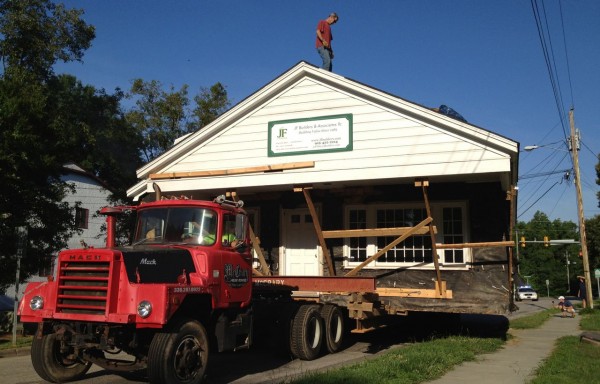 Cary, NC – If you woke up early last Saturday, you might have witnessed a house driving down Kildaire Farm Road to its new location on East Cornwall.

June 9th at 7:30 a crowd gathered to watch Jeff Fike Builder’s team of professionals manuever the little ranch house off its old lot and onto a vacant lot prepared weeks earlier.

The compact little ranch at 408 Kildaire Farm Road had been condemned to the wrecking ball by an expansion of Glenaire Retirement Community. Formerly owned by long time Cary Resident, Mary Lib Trent  (now of Rutherfordton),  Jeff Fike had been renting the home at the time. He asked Glenaire (who had purchased the property from Trent)  if he could have the house if he agreed to pay for the move. Glenaire agreed and Fike then purchased the lot at 116 East Cornwall where he planned to move two structures. The clear lot was purchased from another old time Cary-ite, Freddy Pippin who had used the site as a garden since 1964. 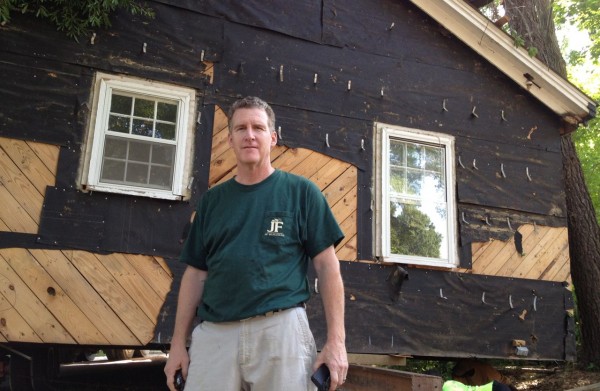 A few weeks ago, Fike moved the “guest house” from the same address which had long ago been the home built for Mary’s elderly mother. I spoke with Annie Burns,  who once rented the smaller residence from Trent. She befriended Mary Trent when she lived there and was happy to see the house survive.

The smaller structure had been moved to the site in preparation for plans to join the two structures with a breezeway. The renovation will create a “recycled” ranch-style home of approximately 2100 square feet including 4 bedrooms and 2-1/2 bathrooms.

The larger home proved more tricky to move than initially anticipated. Turns out the peaked roof was too tall to fit safely beneath the power lines it would traverse, so Fike came up with a solution: cutting open the roof and hinging the two half roofs back. Even so, workman rode the roof during the move to ensure lines and tree branches were cleared away.

Work will begin shortly to build a new foundation under the two structures, while they are each jacked up on pilings. When the foundation is complete, the houses will be lowered down to meet the new foundation, and the breezeway that will connect them will be built. If all goes according to plan, the finished renovation will take about 4 months.

Watch a video of the house move down the street on YouTube.