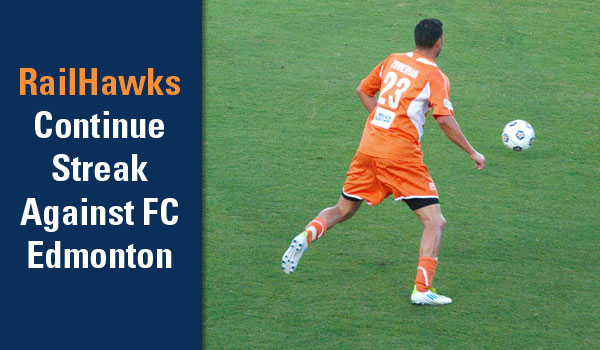 Cary, NC – FC Edmonton came south to face the sweltering heat in Carolina – both the weather and the RailHawks. But it was a chilly reception for Edmonton, losing 2-0 on Saturday, June 23 in front of nearly 4,000 loud fans.

The RailHawks were coming off a win against Atlanta – their third NASL win in a row.  Both goal scorers in that game were Cary natives – Zack Schilawski and Brian Ackley.

The Edmonton Eddies had never beaten the RailHawks in Cary. History repeated itself.

RailHawks Take the Lead 2-0 in First Half

The RailHawks played ball control for the first minute culminating in a wicked flurry of shots in front of Eddie GK Lance Parker.

RailHawks GK Ray Burse had to make a tough save of his own on a shot in the 16th minute from Eddie midfielder Ilja van Leerdam.

The ‘Hawks returned the favor with some nice pressure in the 23rd minute that ended with Ortiz powering the ball over the goal, over the stands and into the parking lot.

Midway through the first half the near misses were causing the RailHawks to get a little impatient with one another as evidenced by some of the animated banter among the players.

A great cross from the corner from Ortiz to Schilawski  in the 34th minute was missed by Schilawski. But seconds later Nick Zimmerman dribbled along the back line toward GK Lance Parker and slipped the ball past the goalie for a score. One of the nicest goals of the year.

In the 38th Schilawski led Ortiz up the middle for a picture perfect score putting the RailHawks up 2-0. A score that never changed the rest of the game.

The RailHawks had outshot the Eddies 11-3 as the half ended.

Edmonton was able to get more shots in the second half, but the ‘Hawks dominated play. The second 45 minutes also brought chippy play and players constantly hitting the ground, often accompanied by the ref presenting players with cards.

Halfway into the half Amir Lowery even received two yellows and a red within seconds of one other.

After the smoke had cleared there were 8 cards issued and a multitude of whistles blown. Many of the fans were calling out “Let them play!”, but the referees were doing what they had to do to keep the game from getting out of hand.

Bottom line – another great win for the ‘Hawks are slowly moving up in the standings where they now sit in the middle of the pack.

The Carolina RailHawks hit the road for Fort Lauderdale next Saturday.

The next home game is against the Atlanta Silverbacks on July 3. Join the players on the field after the game for an Independence Day fireworks extravaganza. Get tickets.

The NASL has been producing weekly recaps of play around the league. The latest episode leads off with some nice footage of the ‘Hawks win over Atlanta.

Recipe: Roasting Corn on the Grill