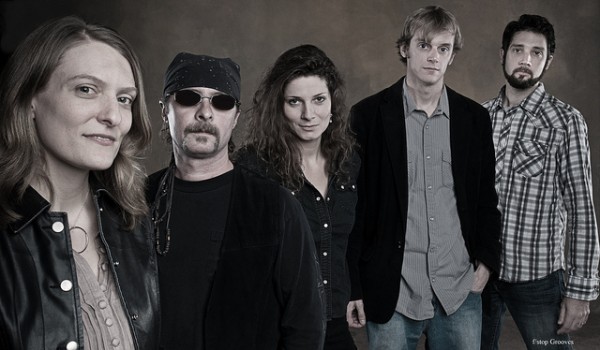 Cary, NC – The Kickin Grass Band makes their debut appearance at The Starlight Concert Series on Friday, June 29, 2012. This  free series of concerts are held on select Friday evenings throughout the summer.

The Kickin Grass Band has made its mark on the roots music scene with strong voices and original songs. Consisting of mandolinist Jamie Dawson; fiddler Pattie Hopkins; bassist Patrick Walsh; banjo player Hank Smith; and guitarist, songwriter and signature lead vocalist, Lynda Dawson, the Kickin Grass Band draws on traditional and contemporary bluegrass to create a sound that is equally vintage and progressive.

The band maintains a steady touring schedule across North America. They were on the 25th Annual MerleFest lineup in April of 2012, and have made recent appearances in Canada, Arizona, New York, New Hampshire, New Jersey, Pennsylvania, Florida and across North Carolina and the Piedmont.

The Kickin Grass Band has released three albums of original and traditional music: Backroads (2003), On the Short Rows (2006), and self-titled The Kickin Grass Band (2008). A fourth album is slated for 2012 featuring the current lineup and an array of new material to keep listeners along for the adventuresome ride.

As a bonus, the concert on the 29th will include young musicians from the Town of Cary’s bluegrass summer camp. This camp is run through the Town Of Cary’s Parks and Rec program and coordinated with PineCone. Students attended camp at Page Walker during June and will perform pieces they learned at this special show.

The camp included students ages 8-16 learning guitar, fiddle, mandolin, and songwriting. Charles Pettee of the Shady Grove Band taught the guitar and mandolin tracks, while Pattie Hopkins of Kickin Grass instructed the students in the beginner and intermediate fiddle tracks. And Kickin Grass leader Lynda Dawson taught the songwriting class! This concert is the culmination of the week-long camp, but we hope it is only the beginning for this next generation of musicians!

Will & Pop’s Food Truck will also be on-site – enjoy some delicious local food, and Will & Pop will be donating 10% of the proceeds from the night to PineCone!

The Starlight Concert Series is co-sponsored by the Friends of the Page-Walker Hotel, Diamante, Inc. and the Piedmont Council of Traditional Music. Other partners include the Cary Cross Currents Chamber Music Arts Festival, The Art of Cool Project and Cary Visual Arts.

Concerts may be canceled or rescheduled in the event of inclement weather. For more information, call (919) 460-4963 or visit Friends of Page-Walker.