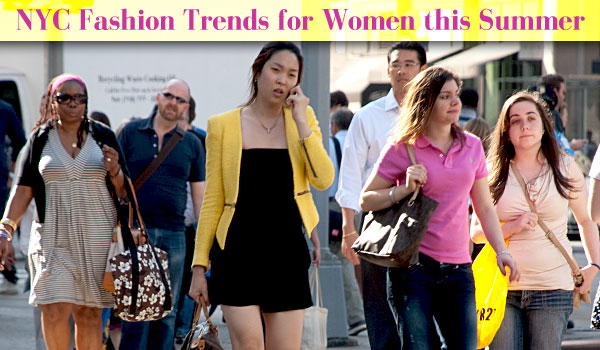 Cary, NC – Earlier this month, CaryCitizen Publisher Hal Goodtree traveled to New York City to speak at WordCamp 2012, a digital publishing conference. While he was there, he spent a couple of hours photographing style on the street. Lindsey Chester explains the summer trends for women. 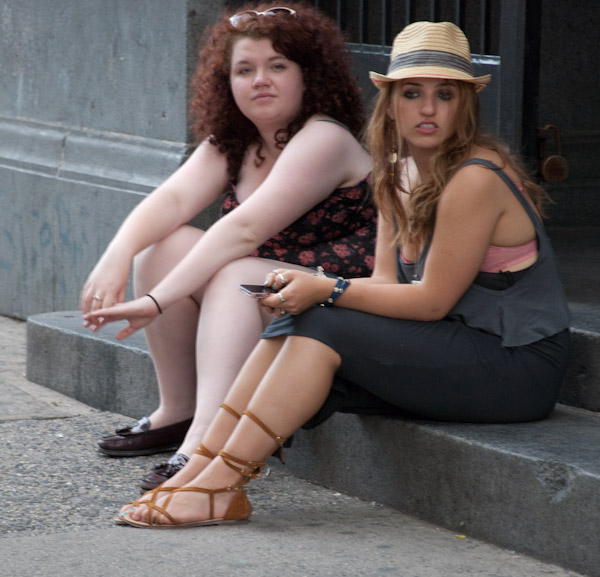 Hats were everywhere and on everyone, not just the uber fashion-forward. Once a trend goes mainstream in Manhattan the sidewalk stalls stock it cheap- like $5 for a hat. The straw pork pie and fedora are the most popular on both women and men. 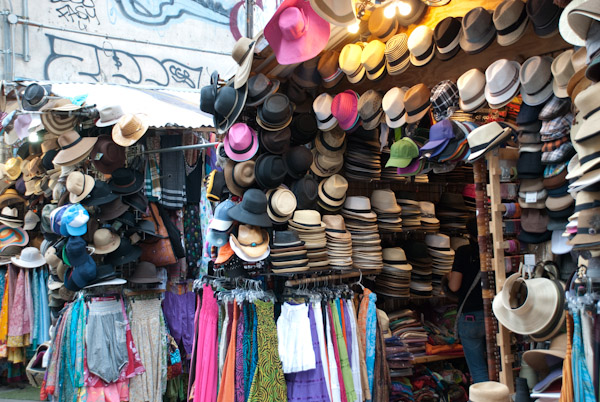 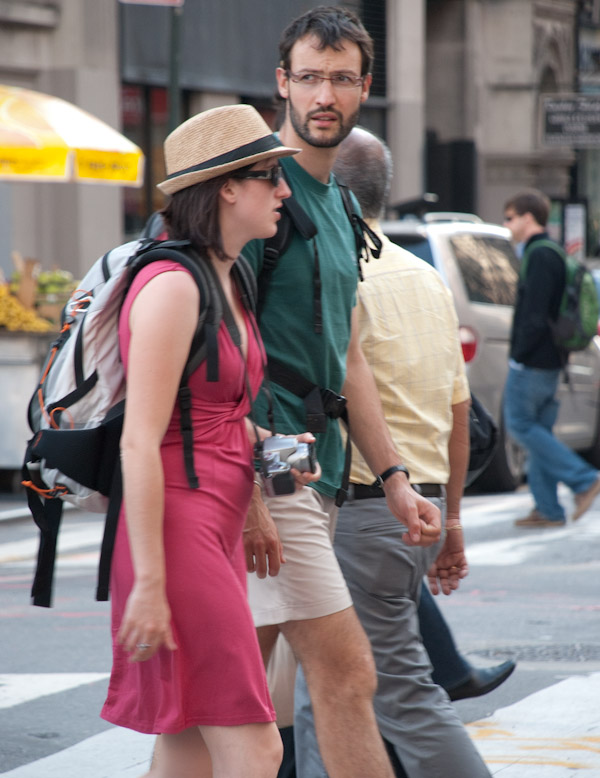 They looked great with a bright dress. 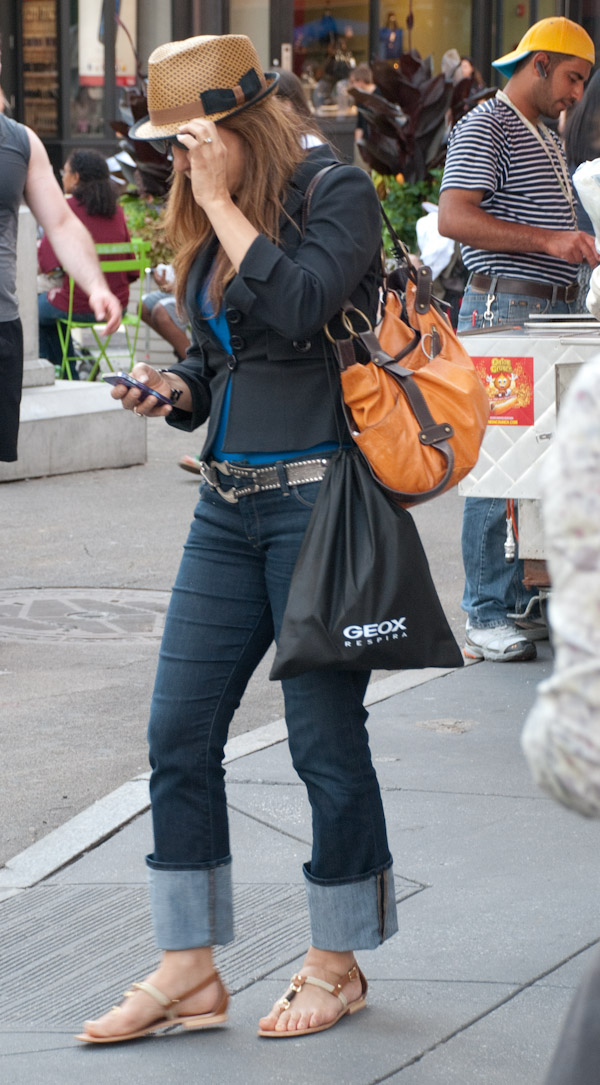 Awesome with a casual jeans outfit.

Another trend that won’t go away- the rolled up jeans. Maybe those hems get a little hot dragging around your ankles, so give that cuff a big roll up and put on a pair of cute sandals to complete your look.

Eye Popping Bright colors have been the THE news in fashion this year. What’s different for summer is color on the bottom – skirts and pants worn with neutral tops are making a comeback. Remember the 80’s with dyed skinny jeans? They’re back! 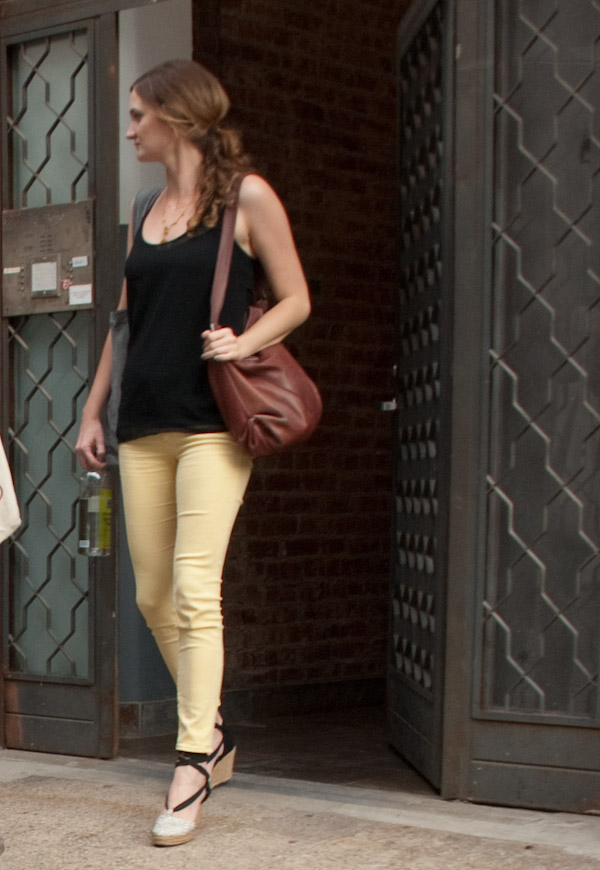 Pops of brights are a great way to integrate the trend into an otherwise neutral outfit. Check out the photo below: black top and city shorts, come alive with the fitted yellow jacket. Very modern. 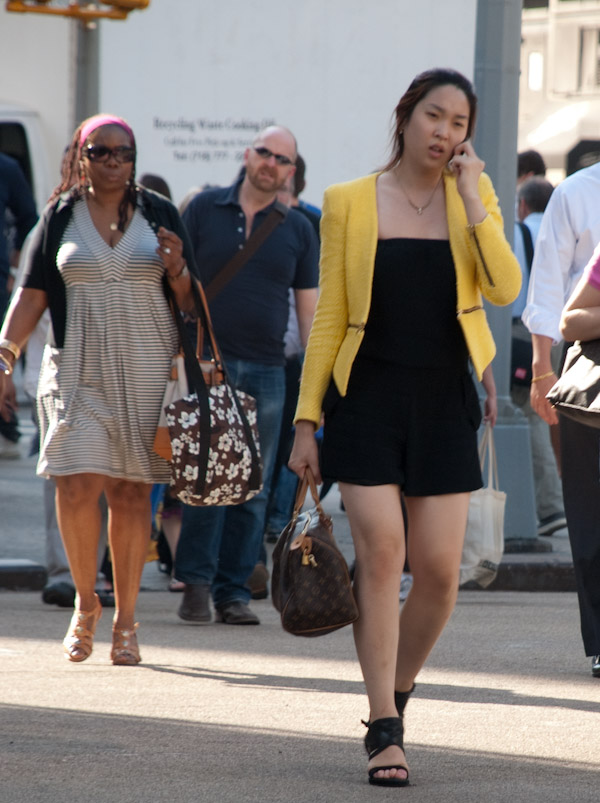 And what could be prettier on a summer day  than a fitted shift dress in hot pink. For evening top with a shrug or lacy shawl to cover shoulders that get cold in restaurant air conditioning. Note her pretty gold wedge sandals- another important trend in accessories- metallics. 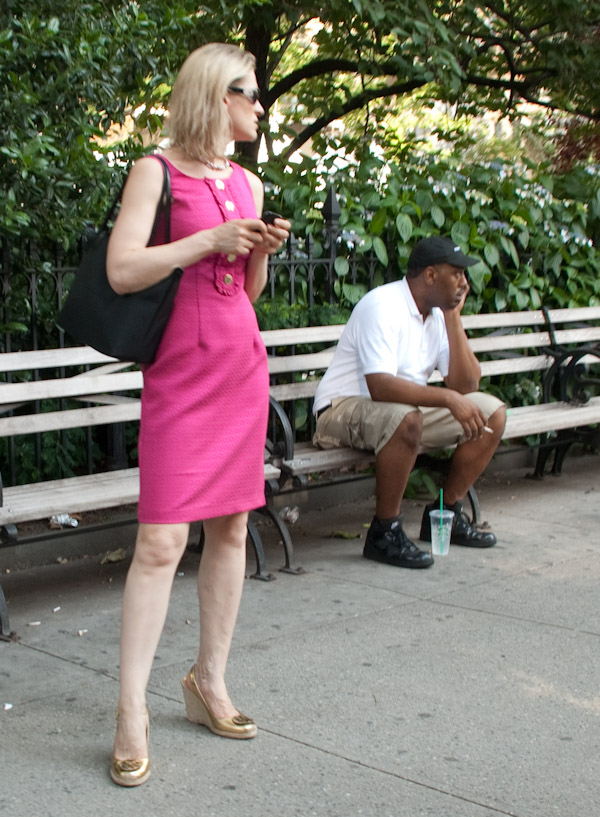 Even phone accessories have jumped on the brights trend – this phone case in turquoise completes a stylish summer outfit. And yes- women in New York do wear boots even in summer! 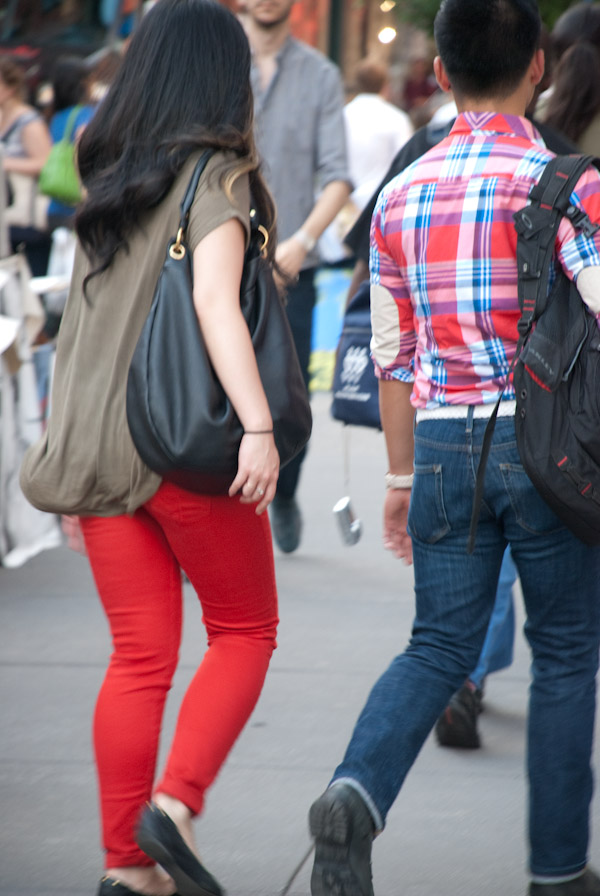 Brights even extended to these rather extreme (and uncomfortable looking) lace-up shoes. More moderate styles (also pictured)  like the gladiator and peep toe shoes would cross over to Cary easily. 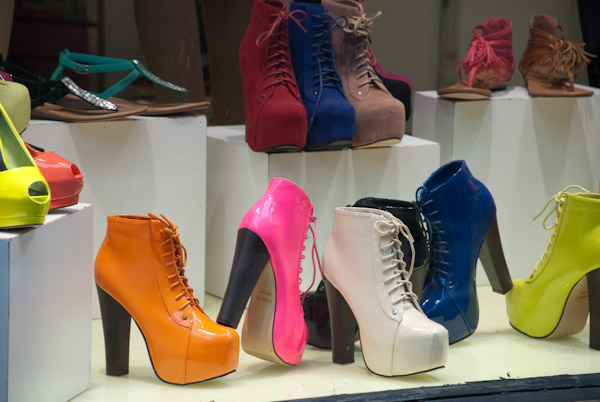 Not only are the styles bright in color, but look for waistlines on skirts and jeans to begin moving upwards. The styles pictured in this store window offer three moves to the middle. The mannequin in the center has a modified medium rise waistline, the skirt falls at the natural waist and the white jeans have moved above for a truly high-waisted look. Also not seen since the early 1990’s. 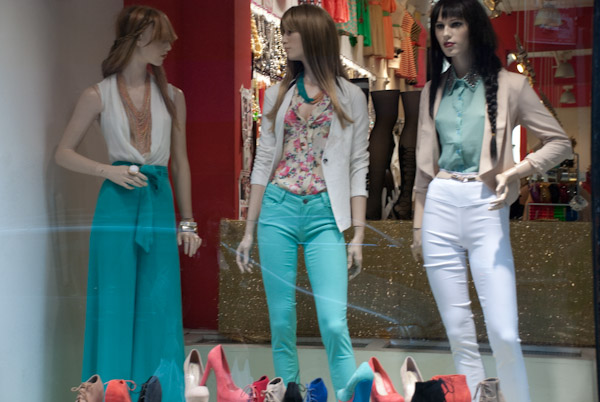 Its been coming on for a while (NBA stars have been sporting Clark Kent glasses for a couple of seasons). These young fashionistas exemplify the look here:  high-waisted city shorts, fitted tops (on both guy and girl) , the porkpie hat, and tortoiseshell eyeglasses. These folks look decidedly nerdy.

And then note the tote: Plaid, in a Burburry knock off pattern. Plaid was everywhere, and not your madras breezy brights, but traditional fall looking plaids in tans, reds and navy. 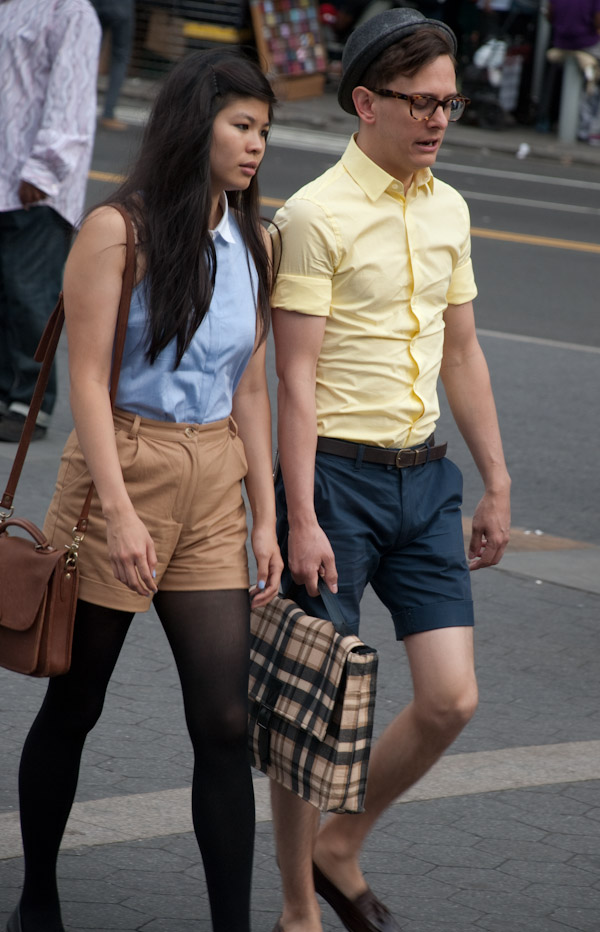 A trend that takes some getting used to: the Commes Des Garcons-like use of voluminous amounts of puffy fabric. It was seen frequently worn by a more arty- type woman to be sure. 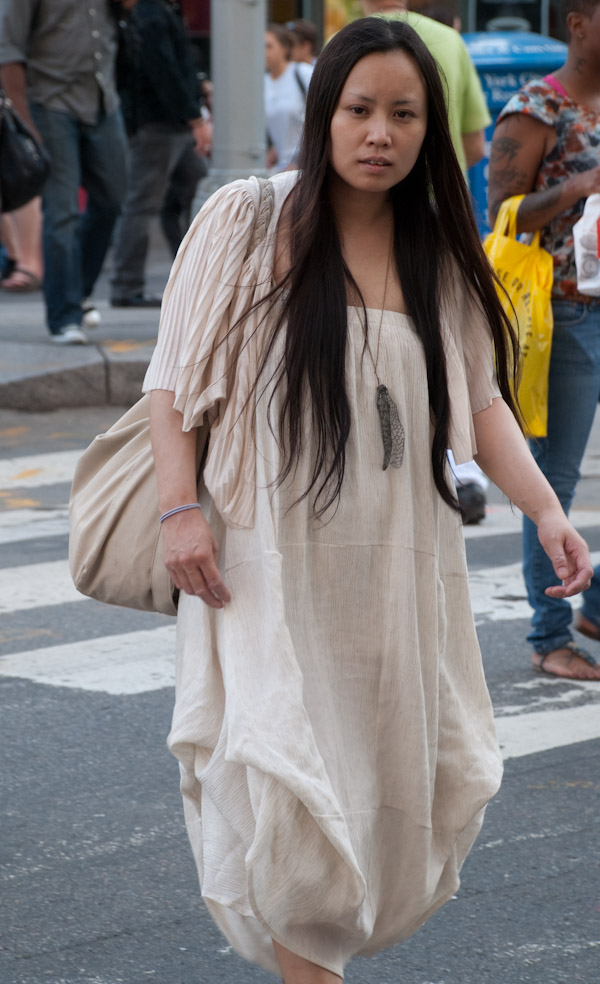 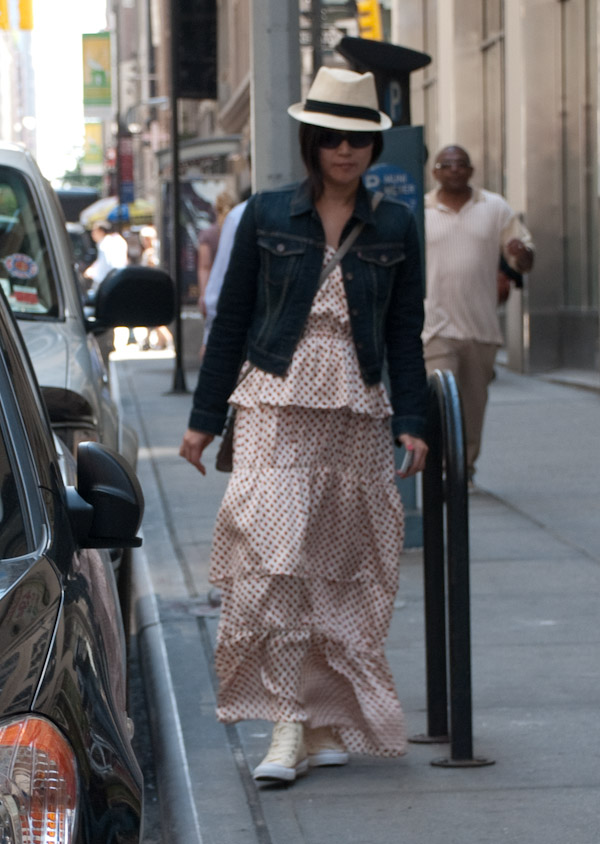 For summer. Here’s a trend, I simply don’t get. Scarves make me hot, and in Cary at 90 degrees the last thing I’m thinking of wearing is something around my neck except maybe a necklace. In New York (maybe its the air conditioning?) women were still wearing them. Below provides that pop of bright. 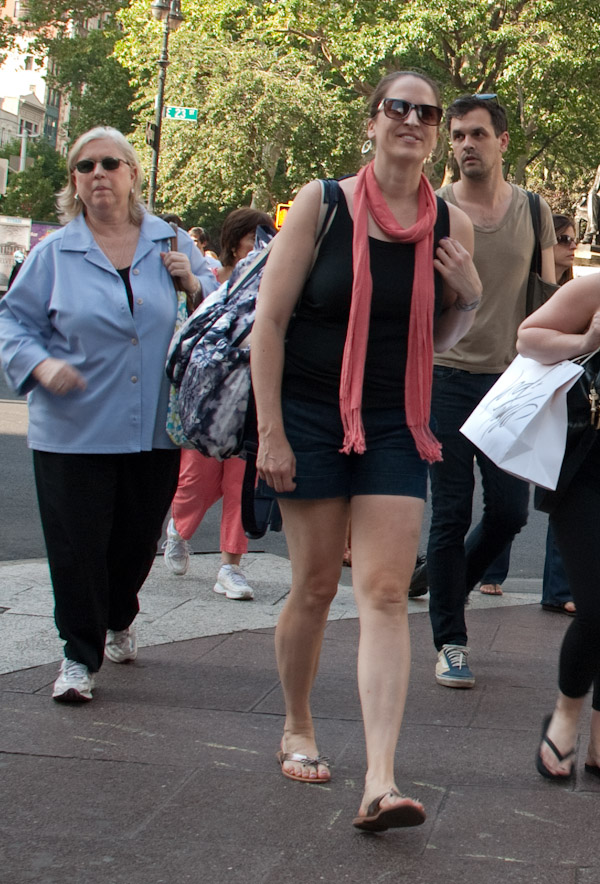 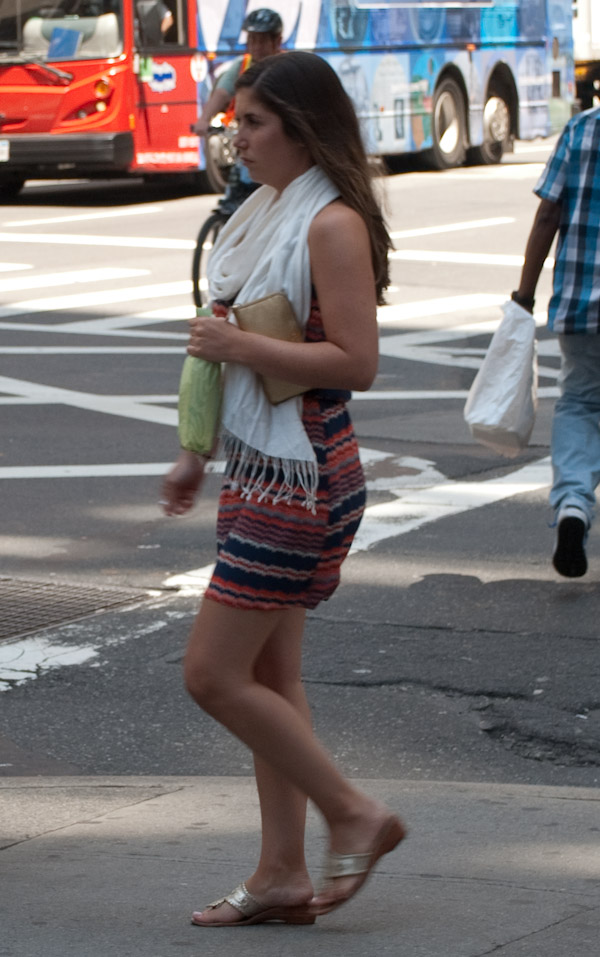 Some of these trends can already be spotted here in Cary, at least with the most fashion forward – and certainly the teens. Others may trickle down in the coming seasons. One thing we know for sure, New York is always ahead of the fashion curve, and we are a pretty casual bunch here in North Carolina.