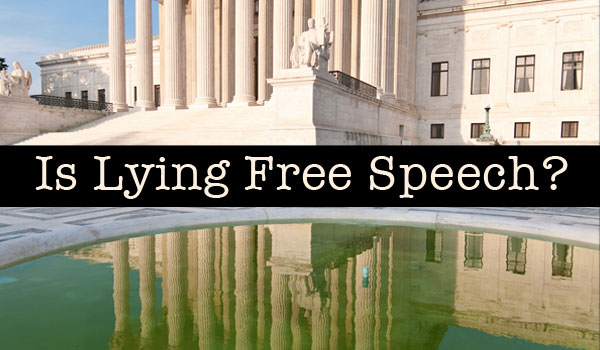 In this story, Wake County Superior Court Judge Paul Ridgeway explains the context of a recent judicial decision that has been in the news. Photo by Mark Fischer.

Cary, NC – I doubt that the words “riveting” and “United States Supreme Court” are often found in the same sentence.   The past several weeks at our highest Court, however, have been riveting for Court watchers and policy junkies alike.

The “Stolen Valor” case is interesting not only for the facts of the case, but also because it illustrates the delicate balance between free speech and outrageous conduct.  Among other things, it raises an interesting ethical conundrum:

Is lying ever protected by our Constitution?

Mr. Alvarez, a member of a local water district board, created a wildly false personal resume. He claimed, when he introduced himself to his colleagues on the water board, that he had played hockey for the Detroit Red Wings and that he had once married a starlet from Mexico. He also presented himself as a retired U.S. Marine, wounded many times and awarded the Congressional Medal of Honor in 1987.

None of this was true. Indeed, the Court said of Mr. Alvarez that “lying was his habit” and that it was “but a pathetic attempt to gain respect that had eluded him.”

A federal law, known as the “Stolen Valor Act” made it a crime to make false claims about receiving a military honor, and in particular, subjected a person who made a false claim about receiving a Medal of Honor to up to one year imprisonment. Mr. Alvarez was charged under this law. He pleaded guilty but reserved his right to challenge his conviction on the grounds that the Stolen Valor Act violated his constitutionally protected free speech rights.

Lying, of course, is not looked upon kindly under our law. For example, merchants can face civil liability for making false representations about their products.    Flim-flam artists can be criminally prosecuted for obtaining property by false pretenses.

But is lying ever protected by the First Amendment as free speech?

The Supremes Weigh In

Justice Kennedy, speaking for the majority of the U.S. Supreme Court, observed that “some false statements are inevitable if there is to be an open and vigorous expression of views.”

Justice Breyer, in a concurring opinion, pointed out that at times, lies (or in the polite parlance of the Court, “false factual statements”) can serve useful human objectives. Lying may prevent embarrassment (“it wasn’t me”), protect privacy (“she’s not here at the moment”), provide the sick with comfort (“this won’t hurt at all”), or stop panic and preserve calm in the face of danger (“don’t worry – help is on its way!”).

Because lying, in some contexts, may be part of otherwise legitimate human activity or political discourse, the Court found a problem with the breadth of the Stolen Valor Act. Had the Act merely punished those who made false statements in connection with, for example, gaining something of value or obtaining employment, then Congress would be within its rights to criminalize the lie. But, where the statute criminalized a lie in any context, the Court said the Act was too broad and therefore unconstitutional.

Without greater specificity, the Court ruled, the threat of government prosecution for lying may cast a chill on free speech, free thought, and free discourse.

Justices Alito, Thomas and Scalia disagreed with the majority.

They viewed the Stolen Valor Act as appropriately punishing conduct that causes real harm and that has no possible intrinsic value as free speech. False claims about military honors, they argued, are often associated with fraudulent attempts to obtain financial or material rewards. Even when not associated with other fraudulent conduct, false claims of valor “tend to debase the distinctive nature of military awards” and are a “slap in the face of veterans who have paid the price and earned their medals.”

Drawing upon an analogy to the protection of counterfeit goods under trademark law, Justice Alito observed that “surely it was reasonable for Congress to conclude that the goal of preserving the integrity of our country’s top military honors is at least as worthy as that of protecting the prestige associated with fancy watches and designer handbags.”

So, in the end, although the Court found Mr. Alvarez’s conduct to be reprehensible, the majority ruled his criminal conviction to be unconstitutional. Even pathetic habitual liars can find redress in our courts when it comes to matters of constitutional rights, and in this case, Mr. Alvarez prevailed.

But the debate over the breadth of the First Amendment’s protection will persist and many, like the dissenting justices, will continue to urge for a different result when it comes to lies or other outrageous conduct.

Events: A Fourth of July Kind of Week in Cary