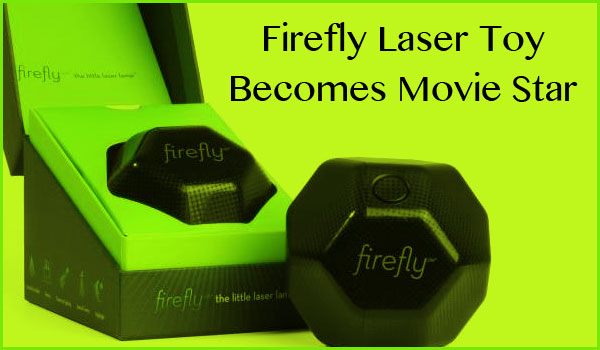 Cary, NC – Parhelion in Cary, makers of the Firefly laser toy, has announced that their toy will appear as a character in a 3D animated film produced by Wilyat Film Studio in Ft. Lauderdale FL.

Firefly – Coming to the Big Screen

The Firefly a character will appear in an animated movie due for release this summer. The film was initially created by Wilyat Studios as a creative concept on Kickstarter, a funding platform for creative products. One of the contributors to the Kickstarter project was Parhelion. Through that connection, Film Director John Wilyat found Parhelion’s laser lamp intriguing enough to include it as a character in the movie.

“The Firefly embodies that spark of magic that ignites the imagination. It is that same spark that exists in an animated film — a very palpable sense of wonder that takes us to faraway places.”

Parhelion was able to provide all the 3D renderings from the industrial design process so that movie version of Firefly is an exact rendering of the actual Firefly lamp.

Sarah Redpath, Parhelion’s President and Cary resident said “We think Firefly’s connection with this film enhances the fun and creativity of the Firefly brand. The film perfectly targets the audience who have found Firefly so appealing — the forward thinking creative artists and the technology buffs. We’ve had some great interest from local artists and scientists who’ve used it for parties and camping.”

The movie plot revolves around Graham, a lonely coffee making robot, who dreams of escaping the dark house of the inventor. The story will be told using richly designed and highly detailed 3D character models and environments, images will be beautifully rendered with Pixar’s Renderman and ‘filmed’ with a virtual 3D camera.

To learn more about the film and see the introductory teaser for the film, visit the Kickstarter website.

See You in Cannes

After the film’s release in July, Wilyat Studios will submit it to several film festivals in the short film category, including Cannes Film Festival and Sundance Film Festival.