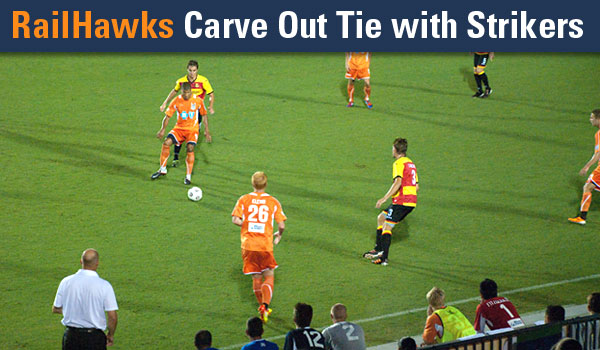 Cary, NC – Fans witnessed an exciting comeback as the RailHawks rallied from a 3-1 deficit in the last few minutes of the match to tie the Fort Lauderdale Strikers 3-3 at WakeMed Soccer Park on Saturday night.

“We should have finished the game in the first thirty minutes and our mistakes were very costly,” said Head Coach Colin Clarke. “We dominated the first half, but mental errors costs us three goals and too many missed opportunity for our team. Fortunately we were able to earn the equalizer at the end. Now we have two weeks to work and get stronger mentally.”

The RailHawks began dominating the game in the early stages and scored the first goal of the match in the 13th minute. Breiner Ortiz had a shot that hit the far post and Palacio was able to score off the rebound.

The RailHawks continued the barrage on goalkeeper Matt Glaeser, but were unable to add to the lead. Suddenly, in the 31st minute of play a counter attack by the Strikers finished with a goal by King.

Just two minutes later Restrepo stunned RailHawks fans as the Strikers scored their second goal of the match to make the score 2-1 at halftime. Abe Thompson assisted both goals for the Strikers.

The Strikers continued to play dangerous counter attacks and the strategy proved to be successful for a third time when Restrepo scored his fifth goal of the season to make the match 3-1. King earned the assist on the goal that forced the RailHawks to push forward to salvage points.

In the 87th minute Palacio scored his second goal of the match after great footwork in the box. Finally in the final seconds of added time, Palacio crossed a ball to the far post that Shipalane settled and proceeded to slip the equalizer past Glaeser to tie the match.

The RailHawks have a two-week hiatus in league play and will return to NASL action on Saturday, July 21st against the Minnesota Stars.

Prior to the game, fans can participate in the Inaugural Pregame Pig Pickin’ Festival. Entry to the festival will be $10 and include barbeque and beer.