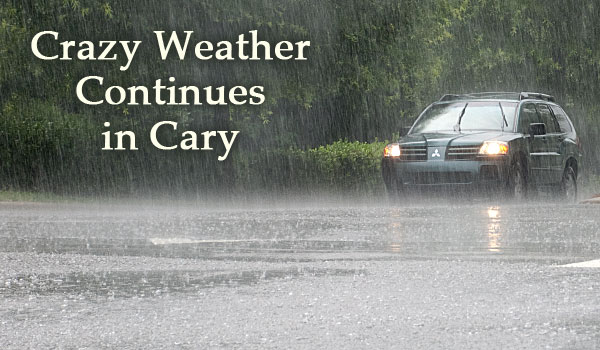 Cary, NC – “Well, what did you expect?” asked my neighbor Steve, a Southerner of pre-Revolutionary origins. “When you have a year with no winter, this is what you get.” The heat wave in Cary is predicted to continue today (Sunday), followed by an unusually cool spell of weather.

For the most part, it’s been bone-dry and blisteringly hot in Cary for the last 10 days.

A freakish thunderstorm blew through western Cary at about 5 PM on Friday. Hail was pinging off the windows; entire trees came crashing down. Rain of Biblical proportions flooded out of the sky for ten minutes, then vanished.

But just a couple of miles away in downtown Cary, nary a drop fell from the sky.

On Monday, the script flips, with cooler air pushing in for a few days.

Temps are predicted to fall through the 80’s throughout the week. According to Weather.com, the high for Thursday is going to be 78° F. The average for this time of July in Cary is around 90° F.

Making Up For Lost Rainfall

Meanwhile, less than a quarter inch of rain has fallen in July, usually the wettest month of the year.

The cooler weather this week may bring some much needed moisture to Cary lawns and gardens in the way of thunderstorms.

Average precipitation for July is 4.73″.

RailHawks Carve Out a Tie with Ft. Lauderdale
Scroll to top