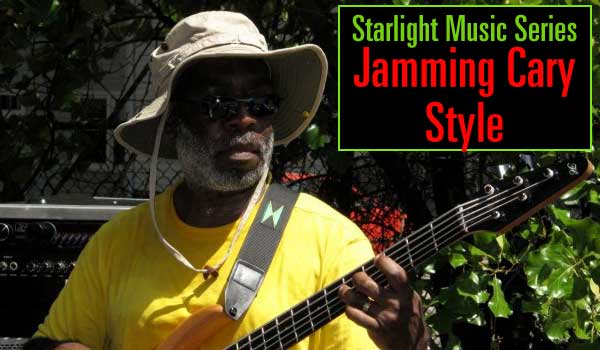 Its obvious from their sound that Jamrock’s members hail from Jamaica. Their music is based on authentic “Jamaican style” reggae and all versions of reggae are played i.e. Lovers Rock, Oldies, Dancehall and Roots. .The band was founded in 1995 and is based in Raleigh.

The bass guitar and the keyboard created a full wall of sound that got many in the crowd up on their feet dancing for the entire evening. Saxophone solos by Graham Mulvaney added another dimension as did the drummer in his distinctive red turban. Frontmen Carl Baxter and Gerald Mulvaney harmonized wonderfully and had great stage presence. Lead guitarist Ron Butler with his knee length Rasta braids added some spice to the mix.

Its been a while since I attended a concert in the Page-Walker garden area. The band set up on the elevated permanent stage, and folks brought their blankets, folding chairs and picnics to enjoy the cool summer breeze and the reggae rhythms. It made for a perfect end to a hot summer week. 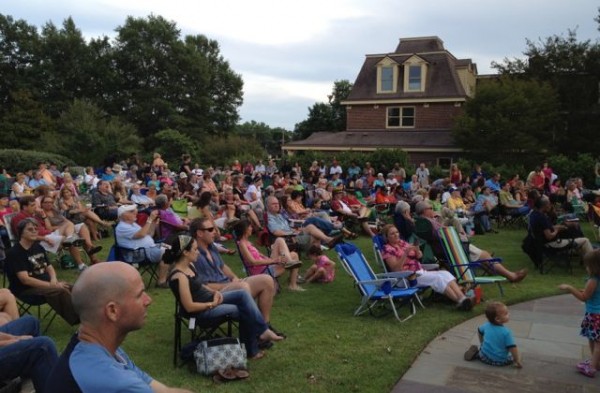 Hundreds of Cary-ites came out for the show, as Jamrock is a regular the Starlight Series Line up. These local favorites drew a diverse audience ranging from toddlers to grey haired ponytails and all shades in between.

The band closed with a medley from everyone’s favorite Jamaican, Bob Marley, which included “No Woman No Cry”, “Don’t Worry”, “Exodus” and “Stand Up For Your Rights”. The sun had set an hour before and the band played past the advertised 9pm but folks would have stayed even later.

Familiar as I am with concerts at other venues, I would like to see some refreshments offered for sale at Page-Walker. Friday night it seemed like a huge missed opportunity for the Friends. A couple food trucks could easily set up in the parking lot or area adjacent to the garden. Light snacks, beverages or some frozen treats would have been a welcome addition to the evening.

Jamrock (and the Starlight Concert series) gets two thumbs way up.  I’ll be back next year!