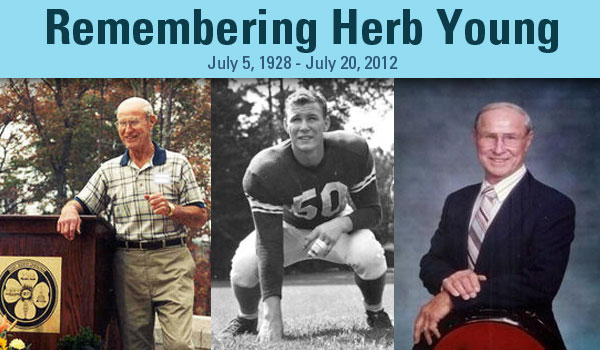 Cary, NC – It is with great sadness that we report the passing of Herb Young, Cary Town Councilman, volunteer and sports icon. He was 84.

Herb was a natural athlete, tall, strong and sure-footed. He lettered in three sports at Cary High School and won a regional Golden Gloves boxing event at the age of 17.

Herb worked for Bell South for 37 years as a building engineer. He served on Cary Town Council from 1966-1975.

Herb volunteered with the Cary Parks and Recreation for over 50 years. The town renamed its first community center in his honor in 2001. Today, people of all ages and interests can find recreation, entertainment and enrichment at the Herbert C. Young Community Center behind Town Hall.

The Young Family opened and operated the Triangle Swim Club on Old Apex Road for more than three decades. Herb was there every summer from 1970 to 2006. That facility is now closed, but Herb’s energy and enthusiasm touched literally thousands of children and adults.

A Memorial Service will be held on Monday, July 23, 2012 at 11:00 am at the First Baptist Church in Cary. The family will receive friends immediately after the service.