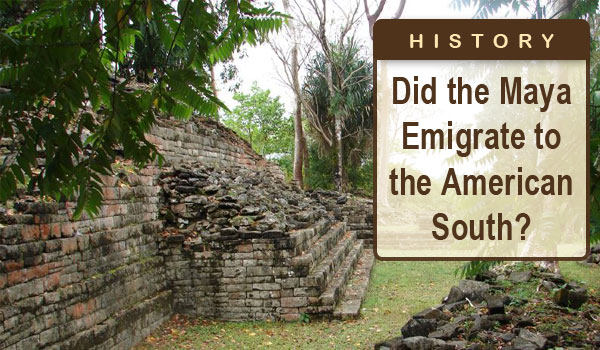 “Several Southeastern tribes have long said that their ancestors received immigrants from Mesoamerica and that these immigrants introduced many cultural changes. Far too few anthropologists were listening.” – Richard Thornton

Did the Maya Emigrate to the American South?

As the Maya civilization began to collapse around 800 AD, Maya cities were being deserted. It was a period of great disruption. Drought, volcanic activity, and famine resulted in a severe decline in population of several Maya regions. Scholars have long debated the question, where did they go?  Richard Thornton’s book, “Itsapa: The Iza Mayas in North America,” provides an interesting answer. He thinks some of the Maya migrated to Southeastern North America.

Richard Thornton, a Creek Indian, is an architect and city planner, who studied Mesoamerican architecture with archeologist Dr. Roman Pina Chan of the Museo Nacional de Anthropolgia de Mexico. When Thornton was a student, Dr. Pina Chan called Thornton’s attention to similarities between ruins, petroglyphs, early stone carvings and pottery designs from the United States and Maya cultures and asked him to consider the implications. Even though Thornton’s career took many paths, these probing questions influenced his research.

While Thornton has his critics, his findings are intriguing. His research is wide ranging but has focused on Brasstown Bald, Georgia’s highest mountain and the Track Rock Gap area, near the base of the mountain. Thornton found ruins of around 154 masonry walls, terraces, rock ruins, retaining walls and also signs of irrigation systems that are similar to Maya ruins and indicate early Maya presence. He studied petroglyphs at Track Rock Gap, where he found evidence of Maya designs.

Judaculla Rock, which predates the Cherokee and is near the campus of Western Carolina University, has Maya designs on it, according to Thornton.

Thornton’s research is multidisciplinary. He cites DNA findings, oral history of the Creek Indians and similarities in architecture, art and linguistics to reach conclusions about early Maya migration. He found that by using huge sailing rafts, the early Maya traveled great distances and engaged in extensive trade.

Thornton’s critics are firing away.

Dr.  Mark Williams, Director of the Laboratory of Archeology at the University of Georgia, calls Thornton’s theories, “total and complete bunk.”  James O’kon, author of “The Lost Secrets of Maya Technology,” examined pictures of the Georgia ruin sites and found no evidence of Maya jadeite carving tools, no signs of mortar usually present in Mayan architecture and ruins that he thought were too disorganized to be Maya.

Thornton counters that it was the commoners and merchants, not the elites of Maya civilization, who came to North America. He also presents evidence of very similar ruins within Maya civilization. Critics have not refuted Thornton’s DNA evidence, linguistic studies or his use of Creek oral history to reach his conclusions.

We visited Brasstown Bald in Georgia and talked with officials at the Museum. One official was visibly irritated at the mention of Thornton’s book and told us loudly that the area had no ruins influenced by Maya cultures. Gordon speculated that she was upset because if Thornton’s research turns out to be correct, the museum would need a major makeover. Neither Thornton’s book nor mention of his research could be found in the museum or bookstore.

Hiking the Arkaquah Trail, which is open to the public, we saw some terrace structure ruins. Then we drove to Track Rock Gap to see the petroglyphs mentioned in Thornton’s book.

Did the early Maya migrate to the Southern Highlands of the Southeast?  We don’t know for certain but the implications are far reaching. Thornton’s challenge to conventional wisdom has stimulated considerable debate, which often signals major breakthroughs ahead.