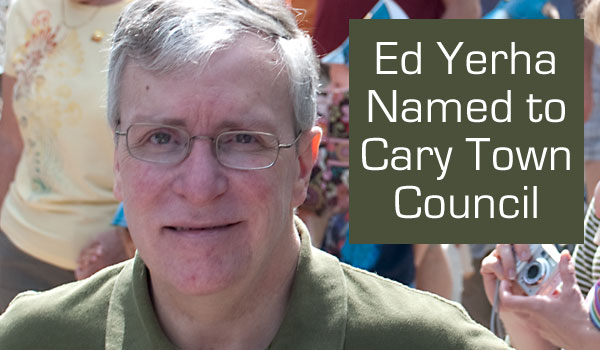 Edward A. Yerha, a seventeen-year resident of Cary, has a long history of civic involvement.

Yerha works as a Senior Tax Analyst for Lenovo. He has a Bachelors degree from NYU and is a longtime member of Resurrection Lutheran Church in Cary.

In His Own Words

Here is some of what Ed Yerha said in his Statement of Interest and Qualifications for Cary Town Council At-Large Vacancy:

Cary has been getting better and better at preparing for this growth with the necessary infrastructure and services but, as much as we like to think that we are in control of our rate of growth, the biggest determinant is clearly the economy. As the economy improves, we have to be careful that our eagerness to see new development coming our way does not cause us to compromise our standards regarding infrastructure. We are all familiar with the phrase “adequate public facilities”. I think Cary is capable of “superb public facilities”. We are well on our way already.

Cary can and should continue to grow in a quality manner but it should not grow, in my opinion, by….

59 candidates submitted their names for consideration to fill Julie Robison’s seat on Town Council. Ms. Robison resigned from Council, effective June 30, 2012, to join her husband at a new job in West Virginia.

Yerha will fulfill the remainder of Robison’s term which runs through 2013.