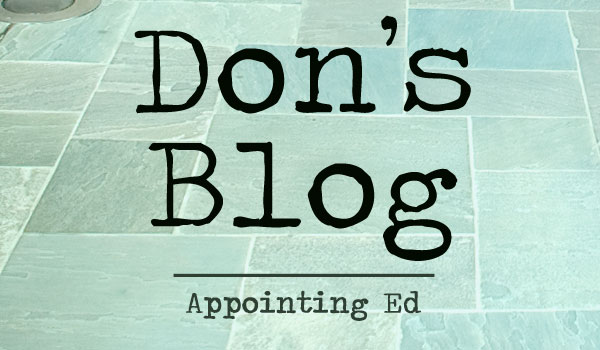 I have known Ed Yerha for about ten years now. Ed is a good and honest man. He is professional and kind and treats everyone with respect. And for as long as I’ve known him, he has always volunteered his time and energy towards making Cary a better place to live. I worked on his campaign for the Cary Town Council in 2005. Here’s proof for you non-believers. ;-) I’m the one who didn’t hide their beer. ;-) 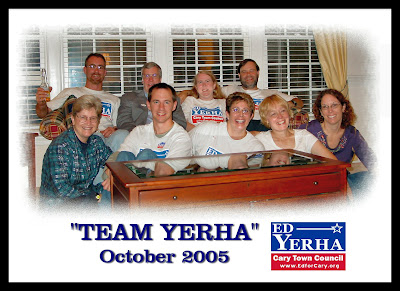 I am confident that Ed will serve Cary well as a member of the Cary Town Council.

I hate I couldn’t vote for him.

This council always prides itself in being able to work together as a team, and I think most folks would agree that we’ve done a pretty good job of it. We have always avoided partisan conflict unlike many other area boards. We respect one another’s thoughts and opinions, and we have always tried to find common ground or consensus whenever possible. Sometimes we do, sometimes we don’t, and that’s ok – at least we tried.

When the Mayor began our meeting, he immediately recognized Mayor Pro Tem Adcock who immediately made a motion to appoint Ed to the council. Councilman Jack Smith seconded the motion. It was clear this decision was made in advance of our meeting, and without consideration of other council member’s thoughts or opinions.

The council had narrowed the list of 59 applicants to 6 – one later withdrew from consideration leaving us with five. After council/candidate interviews, we all submitted our list of top 2-3 candidates to Cary Town Clerk, Sue Rowland who tallied the results for us prior to our meeting. Julia Rudy received 5 votes, Ed Yerha received 4 votes, and the remaining three candidates each received 2 votes respectively.

As much as I like Ed, he wasn’t my first choice. Like I said in an earlier post, there were a lot of extraordinary people who applied for the position. My first choice of the remaining five candidates was Kelly Commiskey. Kelly served on Cary’s Planning and Zoning Board for six years – three as the board chair. Prior to that she served on Cary’s Information Services Advisory Board. I actually served with Kelly on Cary’s Planning and Zoning Board prior to my election where I witnessed first hand her passion and commitment to our community. She always voted her conscience and what she believed best for all of Cary – not just a vocal minority. She has stood strong in the face of some pretty fierce winds – and I believe we could use some more of that on the council.

But unfortunately for a couple of us, Kelly didn’t receive as many votes as Julia or Ed. Since more of us recommended Julia Rudy (Jack Smith was the only one who didn’t recommend her, and that was because she voted for an apartment complex in his neighborhood…the only one Jack hasn’t voted for in years btw, but I digress…) than Ed, I felt like Julia could be our consensus candidate. But it’s pretty difficult to have that discussion when there’s already a motion on the table.

What disappointed me the most was that just that morning, I spoke with a council member who said to me, and I quote, “I just hope we have a good discussion before somebody tries to make a motion”. …and then he seconds the motion prior to any discussion. Nice.

My only real concern regarding Ed’s appointment is the perception of cronyism. Ed has supported a number of sitting council member’s political campaigns and vice-versa. I can assure you that this is not the case, but the perception issue is real nonetheless. An honest and transparent discussion could have gone a long ways towards addressing this concern.

Cary citizens – especially the 58 other candidates who applied for the position – deserved better.

To support Ed’s appointment under these circumstances would have been an endorsement of my colleague’s actions, and I just couldn’t do that.

Report from the Beer, Bourbon and BBQ Festival