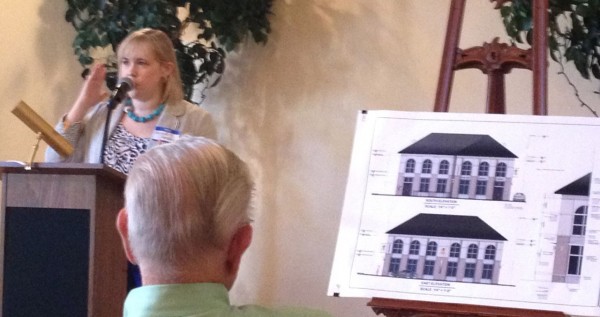 Cary, NC- Rumors abound about what is happening in Downtown Cary, and this past Thursday, August 2, Meredith Chandler gave The Heart of Cary Association (HoCA) members some great insight into what really is happening and some ideas that are just that, ideas.

Meredith Chandler, from the Town of Cary’s Planning Department, addressed the large audience at The Matthews House as part of the regular HoCA monthly meeting. She spoke about a new German bakery planned for the vacant building adjacent to the current Chocolate Smiles Village building. The building plans are currently under review. As previously reported,  Larry’s Beans is coming downtown to the Jones house at the corner of Academy and Dry. Chandler showed an artist’s rendering of how that house could be renovated.

Talk of a micro brewery and another restaurant were premature. And the rumored hotel was deemed too early to disclose. That’s right, a hotel (you heard it here first), may be built on Academy Street, but plans are still in the works, and too premature to disclose.

The old India Bazaar, known by many as the old Mitchell Pharmacy next door to the soon to be renovated Cary Theatre is currently out for RFP (Request For Proposals). The Town has info available on its website under the Bids and Proposals menu item. The deadline for proposals is September 21. 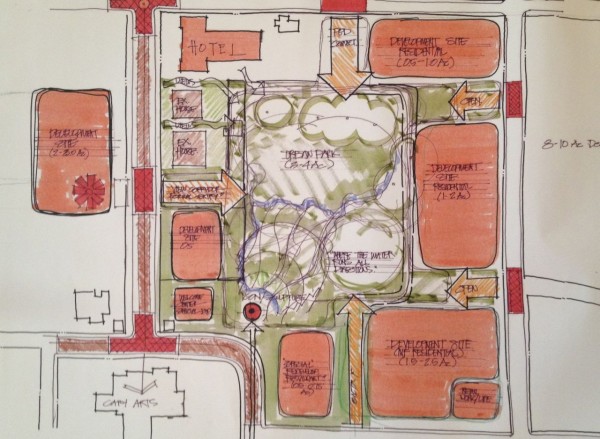 In July, the Town conducted a charette and invited planners, architects and others to review what Ed Gawf, Downtown Development manager has dubbed “The Opportunity Site”. The current parcel, purchased in pieces by the town, now totals nearly 13 acres extending from the corner of Dry and South Academy, north to Chatham and east to Walker. Right now exists an undeveloped meadow of several acres in the center of the parcel, and much of the property has homes of various sizes. This past summer the Town of Cary’s Parks, Recreation and Cultural Resources Department has held a series of performances on the corner that has been called the Performance Green.

During the charette, these planners blue-skied some ideas for this space. Chandler revealed the rough sketch that was created during this session,  which includes some public development (library), park and performance space, and some private multi-use space. She made a point of stating that all of this is conceptual. The next step to planning this site, is public input. Look for info about public meetings and input sessions to be publicized within the next 60 days.

Stay in the Loop

Want to stay in the loop about Downtown Development and Events? Join the Heart of Cary Association. Meetings take place the first Thursday of every month. The group has grown so much in the past year, their meeting place has relocated from its former location in the Cary Chamber of Commerce meeting room, to its new location in the Matthews’ House ballroom. Networking starts at 7:30am with meetings called to order at 8:00. President, Doc Thorne always books a local guest speaker who is informative, Lyman Collins, Cary’s Cultural Arts manager speaks about town events, and other members of the community can stand up to highlight their groups’ events.

Don’t miss the next one!