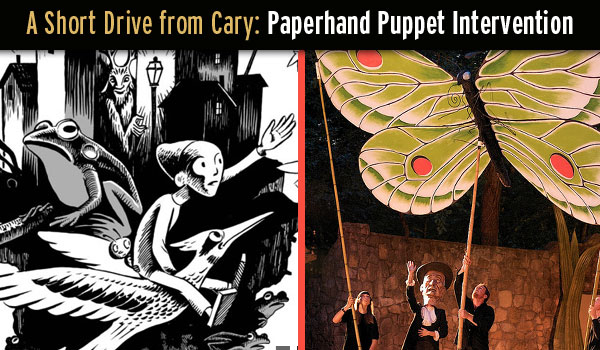 Story republished from The Better Sleep Store in Chapel Hill. Used with permission.

Chapel Hill, NC – Paperhand Puppet Intervention returns to Chapel Hill with their new show from August 10 – September 9. “City of Frogs” promises to be a magical and spectacular experience for the whole family.

Paperhand makes use of giant puppets, masks, stilts, painted flats, junk, and paper-cut shadows to tell stories that are modern epics, hoping to inspire people of all ages toward a better world.

In City of Frogs, an ancient witch has traded her heart for eternal life with the mysterious Man of Beasts. A wooden boy, cut free by the Scissors of Fate, sets out on a journey to help the witch find what has been lost. Ignored by the busy population of the city, the boy must find friends in strange and forgotten places.

The show runs approximately an hour and a half with no intermission.

All performances in Chapel Hill are at the Forest Theater. Gates open at 6:00 pm and all tickets are general admission, first-come first-served. Audiences are encouraged to bring cushions, pillows, lawn blankets and picnics.

Suggested donation: $12 for adults and $8 for kids. Children 3 and under get in free.