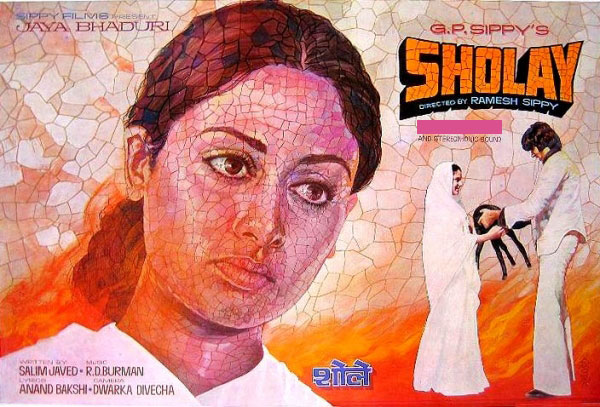 Cary, NC- As a preview to the Cary Diwali Festival that returns to Booth Amphitheatre later this Fall, Hum Sub of Cary is hosting a movie night featuring Sholay on Friday August 24th.

Only Foreign Film of the Summer

The showing is the last film in the Movies by Moonlight series, Booth Amphitheatre’s  summer outdoor film series held every week through out the summer. Sholay is also the only foreign film in this year’s program.

As with all movies in the series, families are welcome to bring a picnic dinner, as well as beer or wine. Concessions will also sell various food and beverage refreshments. Before the movie starts, karaoke singers will entertain the audience with some Sholay character interplay.

For those unfamiliar with the classic film, Sholay is an action-adventure film, released in 1975 and is considered to be among the greatest films in Indian cinema. The film is the story of two criminals hired to capture a ruthless bandit by the name of Gabbar Singh. Produced by G.P. Sippy, directed by his son Ramesh Sippy and starring Dharmendra , Amitabh Bachchan, Sanjeev Kumar, Hema Malini, Jaya Bhaduri and Amjad Khan,

“Sholay” broke several box office records, the most prominent of these – the longest running movie in Indian cinema. Sholay received more honors in the years that followed. It was declared as the “Film of the Millennium” by BBC India in 1999 and in 2002 topped the British Film Institute’s poll of “Top 10 Indian Films” of all time.

2012 will be the third year Hum Sub will present popular Bollywood movies at the Amphitheater. In 2010 Hum Sub showed  “Munnabhai MBBS” followed last year with “Outsourced” . This year Hum Sub decided to present a classic.

To add to the classic Indian experience, enjoy two popular drinks: Chai (tea) and Lassi, an Indian drink made from buttermilk. Each are being presented by  the Association for India’s Development (AID).

The Story of Joscha Gollner, a German Exchange Student in Cary