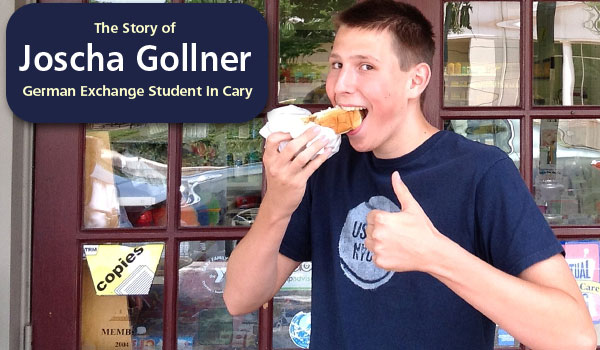 Cary, NC – Joscha Gollner is a typical high school student, balancing playing for the Soccer and Tennis teams, a rigorous academic courseload at St. David’s, and being active in the church. However, there is one small detail that sets him apart.

Joscha lives a half hour’s drive away from Dusseldorf, Germany.

Joscha was a foreign exchange student, living with the Ashworths last school year. He enjoyed living in Cary so much that he actually returned for part of August to see his host family and friends. I sat down with Joscha to get a perspective on Cary from someone from way out of town.

Gollner signed up for the Foreign Exchange Program to learn more about America. While he said he wasn’t given a choice as to where in America he would go, he told me that he couldn’t be happier about landing in Cary.

“Cary is very nice – very clean. Everyone here is so friendly.”

Joscha also wanted to improve his English skills and thought that a year of foreign exchange in America would be helpful when gets set to start a career.

He also admitted to having some misconceptions about the U.S. before he came here.

“I thought we would be eating at McDonald’s a lot, that there wouldn’t be nearly as much variety in everything as there is.”

In terms of culture, Germany is not very far off from the U.S. on the grand scale of things. However, Joscha found plenty of differences between the two.

School was different –  since Joscha went to a private school, the classes were less than half the size of what he was used to in Germany (35 in Germany to ~15 at St. David’s). Joscha said the school was probably his favorite thing about his time here.

He also said that there were many more opportunities for youth members in the church. Joscha played club basketball for his church league. In Germany, the church he attends does not have nearly as many youth programs and he explained that the student had to seek them out, rather than being told about them.

Joscha also found it interesting to see people his age driving – in Germany, you have to be 18 to get a license, so Joscha would bike most places at home. He also said Cary was more spread out than his home town, so biking was not as feasible here.

“We learn English starting in 3rd grade in Germany, but it’s just different here, the way people say things. St. David’s was very helpful to me in every way, giving me extra time or time with the teacher.”

Joscha speaks excellent English. He said that when he first arrived it was hard to understand the accents and inflections of American English, but he became used to it with help from everyone involved.

Living away from family is hard as a teenager. I can’t imagine living away from my family for a full school year in another country. But Joscha said that the Ashworths were a fantastic host family. They planned a large amount of activities like trips to show Joscha other parts of the state and country, and he thought that they were much nicer than an average host family.

He enjoyed living with the Ashworths so much that he told me it was a big factor in his wanting to come back and visit. 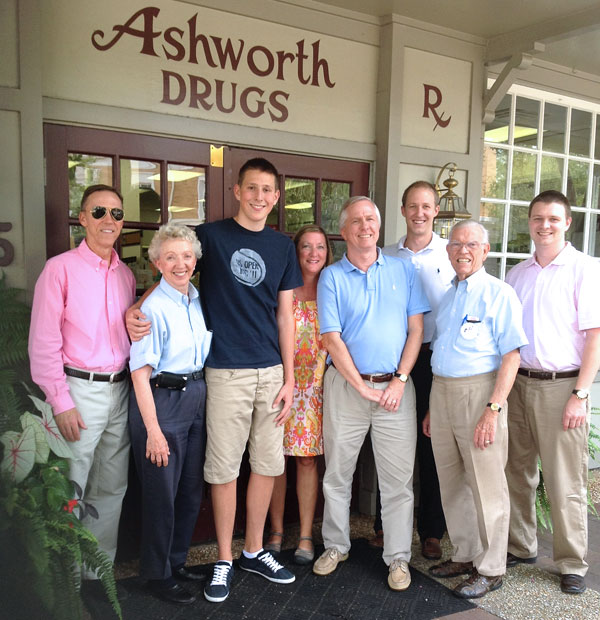 Joscha seemed immensely happy with everything he had been given the opportunity to do in his time in Cary. He said multiple times that the whole experience had been fantastic for him, and that he was thankful to his host family and to his school for helping his transition and making his exchange tour great. I asked Joscha if he had any message for the people of Cary, and he responded with this:

“Be proud of your town, it’s a nice place to live.”