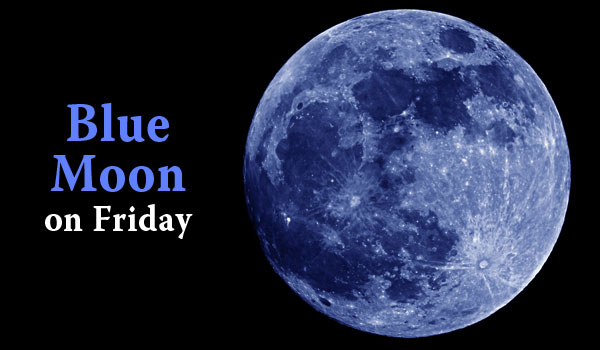 Cary, NC – In popular culture, a Blue Moon refers to the second full moon in any month. In Cary, we had a full moon on August 1, 2012 and another full moon will appear on Friday, August 31.

First of all, it’s not actually blue.

Sometimes, one might see a moon that is blue in the sky, but this is probably from dust or smoke.

A Blue Moon (capitalized) is the second full moon of a month. But this is a recent usage.

Only back in 1946 did Sky & Telescope publish an article with the contemporary definition of a Blue Moon. In 1999, we had two Blue Moons in one year – January and March – and no full moon at all in February.

Celebrate this year’s only blue moon with Blue Moon Bakery & Cafe in Cary on Friday August 31st. There won’t be another one until July 2015!

In Store Specials
While supplies last. Specials for in store purchase only.

Blue Moon Cafe in Cary will be open until 8pm on Friday.

Even if you have no special celebration in mind, glance up at night sky on Friday and see the second full moon of this month, a sure sign that we live in a magical world.

Friday: A Fifth of Blues at RallyPoint