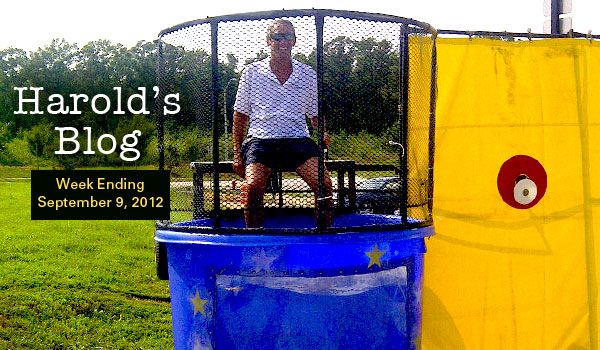 Cary, NC – This week had a little bit of everything: the expected, unexpected, sad, fun, and serious.

Monday was Labor Day and I spent the day doing exactly that, laboring. Most of my day was spent catching up on work at SAS and on yard work.

The reason I was not planning on attending the council meeting is that I agreed to go to the Democratic National Convention a couple of months ago. Then a few weeks ago a change to the regular council meeting was proposed from the second Thursday in September to the first. I went along with this change even though I knew I would not be here. But as luck would have it the outdoor event at the convention was cancelled and so were my tickets and trip to Charlotte. This was a real shame for many of those that invested in this once-in-a-lifetime event by buying hotel rooms, flying into NC, etc. My daughter was one of those that was disappointed and had flown in from Manhattan. On the positive side we got more time together with our daughter which is always good.

Later Tuesday I met with the town manager briefly to go over issues. I talked with him briefly about a phone conversation I had with Mayor McFarlane on amphitheaters. While Cary’s amphitheater is managed by SMG Raleigh’s downtown theater is managed by their staff. We also talked about an email requesting that Cary and Raleigh fund the building of light rail to promote development along the route. This request is financially unreasonable even with the potential tax base from new development.

Wednesday I, along with the entire Cary Town Council attended the 50th annual Cary Chamber Banquet. The keynote speaker was the former chairman of Glaxo Wellcome, Robert Ingram. He gave a fantastic talk about his views of government and industry. Awards were also given out for Ambassador of the Year, Business of the Year, and Citizen of the Year. Congratulations to Chamber President (of 26 years) Howard Johnson for receiving the Citizen of the Year award. It was very fitting that he be the 50th recipient of this award.

A public hearing on changing land use in and around Kingswood Elementary to mixed use and high density drew several speakers. Some speakers were confused with the process and actually thought this was a town proposal. Hopefully, we gave a good enough explanation to clear things up.

Another public hearing was a quasi-judicial hearing on an office building at Regency Park. The council unanimously decided to extend the previously approved office building (2004) for Tryon Road and Regency Parkway for five more years. Our meeting also included an hour of closed session to discuss several items. We adjourned around 10:15.

Saturday morning I attended the memorial at Mt Zion Church for former council member Jess Ward. Jess was on council from 1997 to 2001 and I had the pleasure to serve with him two years. It was a very nice, upbeat service and I had the opportunity to speak on the town’s behalf. Many people might not remember but Jess was a leader in efforts to help the town of Princeville after it was destroyed by Hurricane Floyd. Rest in peace Jess!

Saturday afternoon I helped raise money for the food bank by being in a dunking booth. This fundraising event was held at Rudinos on Tryon Road and included live bands and enough TV screens to see any ball game that was being televised. While I became water logged very fast, it was a lot of fun and was for a great cause.

Sunday I attended the 911 Commemorative concert put on by the town and the Sister Cities Association. I along with council members Yerha and Smith gave remarks. The audience was entertained by performances representing our four sister cities: Markham, Canada; Hsinchu, Taiwan; Le Touquet, France; and County Meath Ireland. This concert was one of over 200 celebrations across the world sponsored by the Sister Cities International to draw people together in the name of peace and understanding.

Emails from staff this week included plans in review (see ToC Plans in Review). Highlights include:

Staff also announced that the Town of Cary and its solar contractor, FLS Energy, broke ground on the Town’s first renewable energy project and one of the largest solar system installations in the area. It will be located at the South Cary Water Reclamation Facility, and will have the capacity to generate 1.8 megawatts of electricity, or roughly enough energy to power 174 homes for a year. Construction is anticipated to be completed in late Fall 2012. All construction, maintenance and operations costs associated with the system will be paid for by FLS Energy

In addition to emails this week I received a letter complaining that our downtown streetscape for Chatham that will front our theater is creating an “impossible situation” for Kitchen and Bath. They claim that if the town continues with its streetscape they will “vacate our present location in Cary.” I certainly hope they will continue to work with the town. While renovations are always difficult, the end result and people that hopefully bring come the area because of the theater should help their business.

Next week is a slow week with one event and several meetings.

Well that is all for this week. My next post will be on Sunday September 16th. Please feel free to email me with a comment. Email all Town of Cary questions or comments to Harold.Weinbrecht@townofcary.org. Email personal comments to augustanat@mindspring.com.