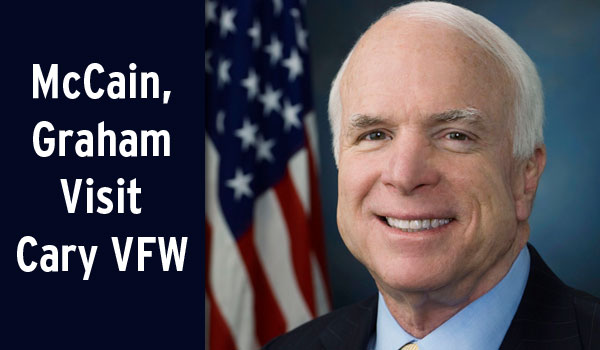 McCain, an Arizona Republican, and Graham, Republican from South Carolina, both sit on the Senate Armed Services Committee.

The event was called “Veterans and Military Families Rally” and began at 9:00 AM at Cary’s Franklin-Sloan Post.

McCain got most of the press and was widely quoted across the region:

For an hour, the mostly genteel politics of Cary gave way to the bare-knuckles of a national campaign.

Meanwhile, just a couple of miles away on West Chatham Street, U.S. Representative David Price (NC-D) refuted McCain’s claims for the benefit of the media.

All in all, it was a banner day for the media in Cary on Tuesday, but not much was really said.

Back to Big Bird

McCain had the wittiest remark about Big Bird, saying on the Today show “I’m for an earmark for Big Bird” (The Hill). That’s especially funny because McCain has been a career-long foe of earmarks.

What’s interesting about the Big Bird thing is that both left and right have embraced it. Cartoons equally funny flood my Facebook page from friends on both sides of the political spectrum. It’s like we needed the opportunity for a laugh, just to lighten up for a minute.

The big spotlight of national politics touched down today in Cary, but just for a moment. No injuries were reported. Back to business tomorrow.

The Week the Irish Came to Town
Scroll to top